Morrice Painting from Once Forgotten Trip to Capri

Only about a dozen Morrice paintings can be linked to Capri 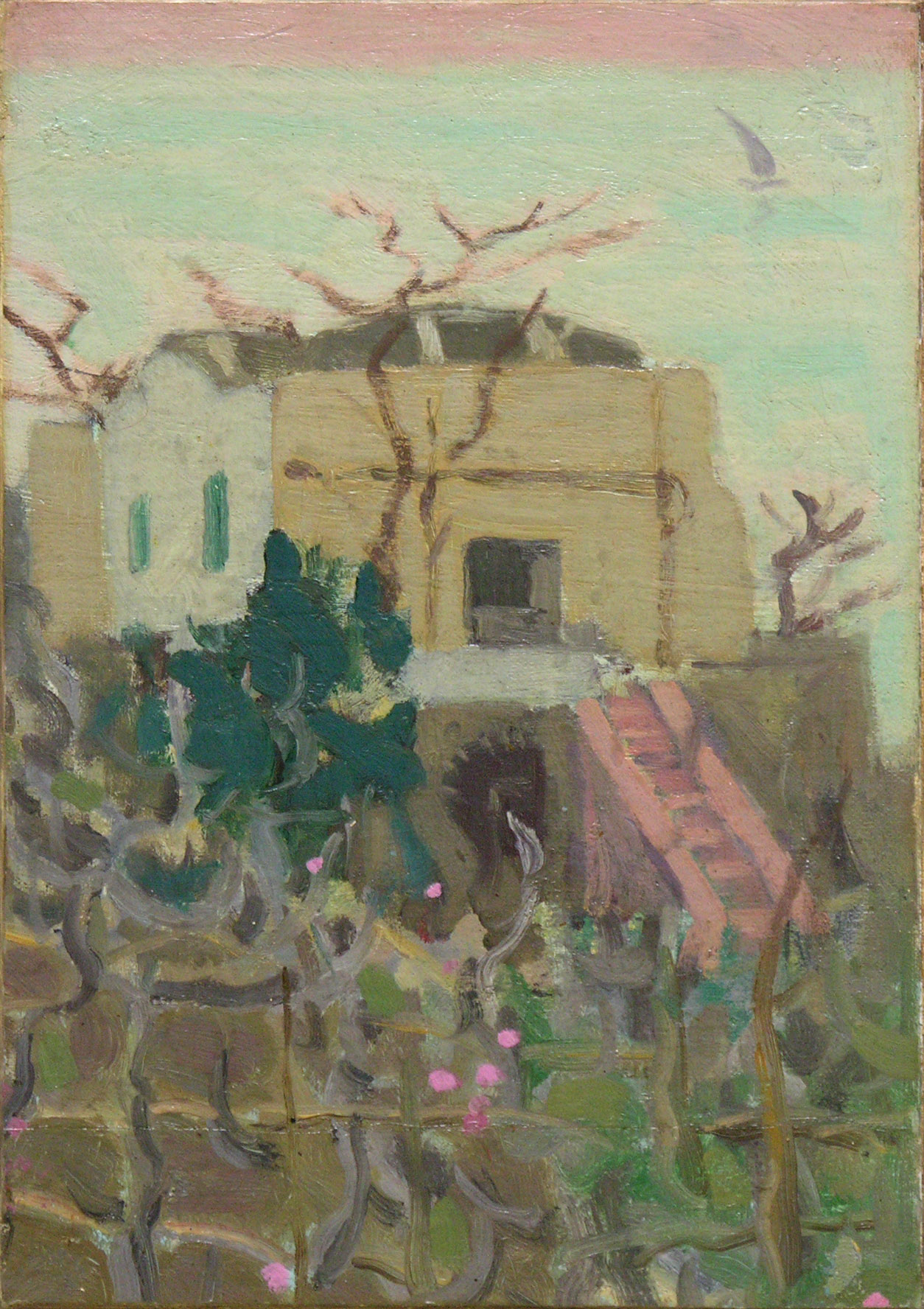 This lovely painting of a stone house at dusk is really a mood... The house is grey but its staircase is pink! We first read the turquoise background as the sky, until we notice, in the upper right, just a whisper of a sailboat: we are far, far above the sea, and the sky itself is reduced to a pink band at the top. The house and its garden, peppered with spare pink blossoms that complement the sunset sky (and the staircase!), are already in the shade. The view would be serene, were it not for the twisted shrubs growing, unchecked, in the garden. In spite of its previous title, "Algiers", this house, with its wall arched in the middle, is typical of the island of Capri before the 20th century, as are the shrubs with their pink flowers, which are still abundant.

James Wilson Morrice's trip to Capri is not well known; his biographer barely mentions it because he found only one canvas with that title (footnote 2). In 1957, when the National Gallery bought it from another collector, it had become "Landscape near Tangiers", a title that endured until 1977 when Charles C. Hill, then Assistant Curator of Canadian Art, identified the subject and gave it back its proper title. The building is the Torre Materita, a medieval house hidden among trees on the road to the Lighthouse. The National Gallery of Canada's canvas was painted not long before the artist went to Tangiers, from a much earlier sketch, "The Black Goat "(Capri), also at the National Gallery of Canada. All the other paintings that I can link to Capri, about a dozen so far including the present one, are much smaller in scale, and their style points to a much earlier date. But since the trip had been forgotten by the early fifties, they were given fantasy titles, mostly North African like here, and dated accordingly (ca 1912-13 if Tangiers, ca 1922 if Algiers). Only one painting never lost its Capri connection: "Terrace, Capri" (Montreal Museum of Fine Arts), which was kept by Morrice's companion, Léa Cadoret.

Two early Morrice sketchbooks document the artist's first trip to Italy.  According to them, he visited Capri, then Venice:  Sketchbook #12, Montreal Museum of Fine Arts, and one that is now dispersed, both contain drawings directly related to the National Gallery canvas.  Neither sketchbook is dated, but the style of their drawings, when compared to other sketchbooks, place them around 1894.  By then, Morrice had been living in Paris (and, briefly, in London) for nearly five years, and he had never travelled that far into Europe. Why Capri? Perhaps Henri Harpignies, the French painter with whom he had taken lessons, had suggested it: his debut at the 1853 Salon was a huge academic vista of the village of Capri, the bigger of only two towns on the island.

The other is Anacapri, where Morrice stayed. Perusing Sketchbook #12, we follow Morrice around the town and down to the harbour of Marina Grande; he often stops to draw or paint whatever catches his interest: fishing boats, a little girl, a myrtle tree along the path and, of course, the local buildings. But there is no drawing of the house depicted here, which was perhaps done en plein air. A typical casa colonica, the Italian term for farmhouse, it follows closely this description of Capri vernacular architecture: "The dwellings of both countryman and fisherman were based on a minimal modular element, a type of cube made up on the ground floor of a cellar (a sort of larder) and the kitchen, and on the upper floor a room traditionally called the 'casa' (house). The two levels were connected by an external staircase."(footnote 3) Many walls were arched in the middle, indicating a barrel-vaulted ceiling inside, and everything was, most of the time, thickly whitewashed.

At the time Morrice visited her, Capri was becoming a flourishing tourist resort, and its real estate had developed accordingly; new building methods made the barrel-vaulted roof obsolete, and whitewashing has become universal; older houses, if they survived, have been modernized. The Stile di Capri, praised by Modernist Italian architects in the twenties and thirties, is one of the strong influences on the style now called International. I have not yet found another image of the house that Morrice painted except perhaps, by sheer luck, one undated painting (footnote 4), which focuses on the space under the stairs; the festooned arch, not typical for Capri, is very close. Upstairs, the main door (not visible) is preceded by a terrace supporting a pergola, another typical element of Capri architecture.  Strangely, there is no pergola in Morrice's painting... another detail that tells us that the house was abandoned. Together with the wild garden and the overwhelming shadow barely enlivened by the sunset sky, it tells a poignant story.

We would like to thank Lucie Dorais for contributing this essay.  Ms. Dorais did her M.A. Thesis on the early life and career of James Wilson Morrice (Université de Montréal, 1980).  She had a promising career at the National Archives of Canada.  Now retired, she is considered by academics, collectors and art merchants to be a foremost scholar on James Wilson Morrice.  Ms. Dorais continues to compile information on the artist, including the Catalogue Raisonné of his oeuvre.