This portrait of a man sitting on a park bench represents Pierre Préfontaine (1842–1897). When the painter, Ozias Leduc, received the commission for this painting, the subject had been deceased for over 15 years. It was his daughter, Anne-Marie (1879–1959), who met with the artist and provided the photo of her father.

Leduc often used photographs in his work as a painter. When he first built his studio in the early 1890s, he integrated a small space to use as a darkroom. He took the photos himself, then developed the negatives on glass and printed them on paper. In his work as a portraitist, he often used photographs as a reference, thus reducing the length and number of sittings. 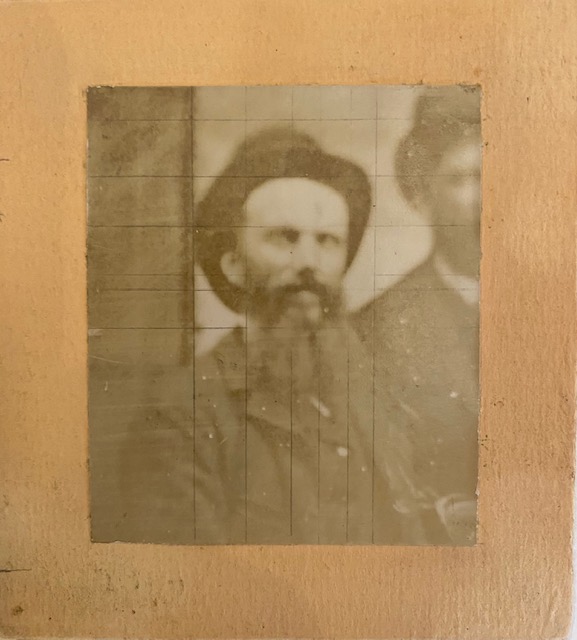 For the Portrait of Pierre Préfontaine, the photo Leduc was given was in fact a group photo that had been cut, leaving just the subject from the chest up (Fig. 1). Despite its poor quality and small size, it was the artist’s only reference. He used it to make a preparatory sketch, which he then glued to a piece of cardboard, tracing a grid over it to facilitate transposing it to canvas. The photo provided the pose and the physical features of the subject’s head and face. However, Leduc had to improvise for the rest of the composition, including the subject’s body, his attitude and the setting.

Leduc’s treatment of the foreground and background were quite different. In the foreground, he presents his subject in three-quarter view, with his head turned towards the viewer. He draws inspiration from the photo for the subject’s face: a large forehead, deep-set eyes, a straight nose and a thin mouth. He further intensifies the subject’s gaze to bring him to life. He also shortens his beard to reveal his shirt collar and tie. In the foreground, Leduc’s drawing is linear, and uses smooth strokes and a reduced, dark palette. Light from the right illuminates the subject’s face, the top of his shirt, and his hands. With this realist treatment of the foreground, Leduc aims to accurately render his model’s physical appearance. Like the main figure, the bench is also rendered with an accentuated contour line. 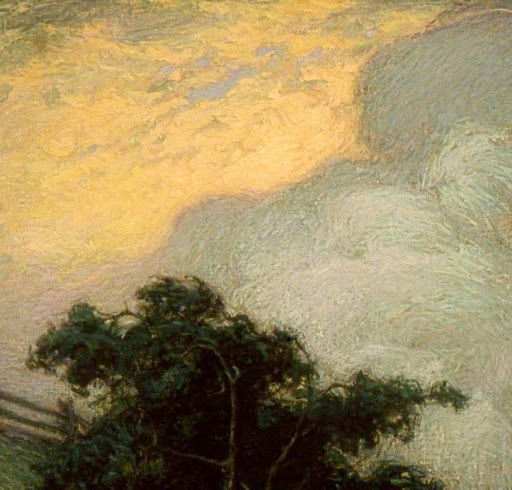 The background depicts a landscape with its own light, separate from the light in the foreground. This landscape features, on the right, a path leading down to a pond and some bushes and trees in the setting sun, creating the illusion of spaciousness. The trees on the left have been hastily drawn; the ones on the right are simply outlines. The small strokes of juxtaposed yellow and grey in the sky radiate light, with hints of red in the horizon. It is reminiscent of Leduc’s pictorial treatment of the upper portion of Blue Cumulus (Fig. 2), the first in a series of landscapes Leduc started painting in the Symbolist style in 1913. In this artistic and literary movement, artists sought to express their soul, ideas and emotions through their work.

Throughout his career, Leduc painted several portraits. His portrait of Pierre Préfontaine is one of very few posthumous portraits, and also one of the few where the subject is presented in an outdoor setting. Leduc generally placed his subject in front of a coloured backdrop, with no reference to the setting or interior decor. In this case, he seems to have drawn inspiration from Benjamin-Constant’s 1896 Portrait of the Duc d’Aumale [3] (Fig. 3). Though inversed, the composition of these paintings is similar: a lone man dressed in black, sitting on a park bench. Both men’s hands are resting, one on the thigh and the other holding a cane. In both works, a reverie-inspired landscape frames the scene, the light drawing the eye towards a bright sky. However, the two men portray very different emotions: the Duc d’Aumale shows melancholy in what seems to be an intense moment of introspection, while Préfontaine’s face is turned towards the viewer, watching intensely.

Who was Pierre Préfontaine? Born in Beloeil in 1842, Préfontaine became a merchant in Saint-Hilaire (known today as Mont-Saint-Hilaire). He dealt in seeds, hay and coal. To facilitate transporting his merchandise between the train station, which at the time was located on the Chemin des Trente (known today as the Montée des Trente), and the village, he had acquired a water lot near the station to build a wharf on the Richelieu River [4] The apple growers in the area also used this wharf to move their apples onto the boats of the buyers who came to Saint-Hilaire for supplies. 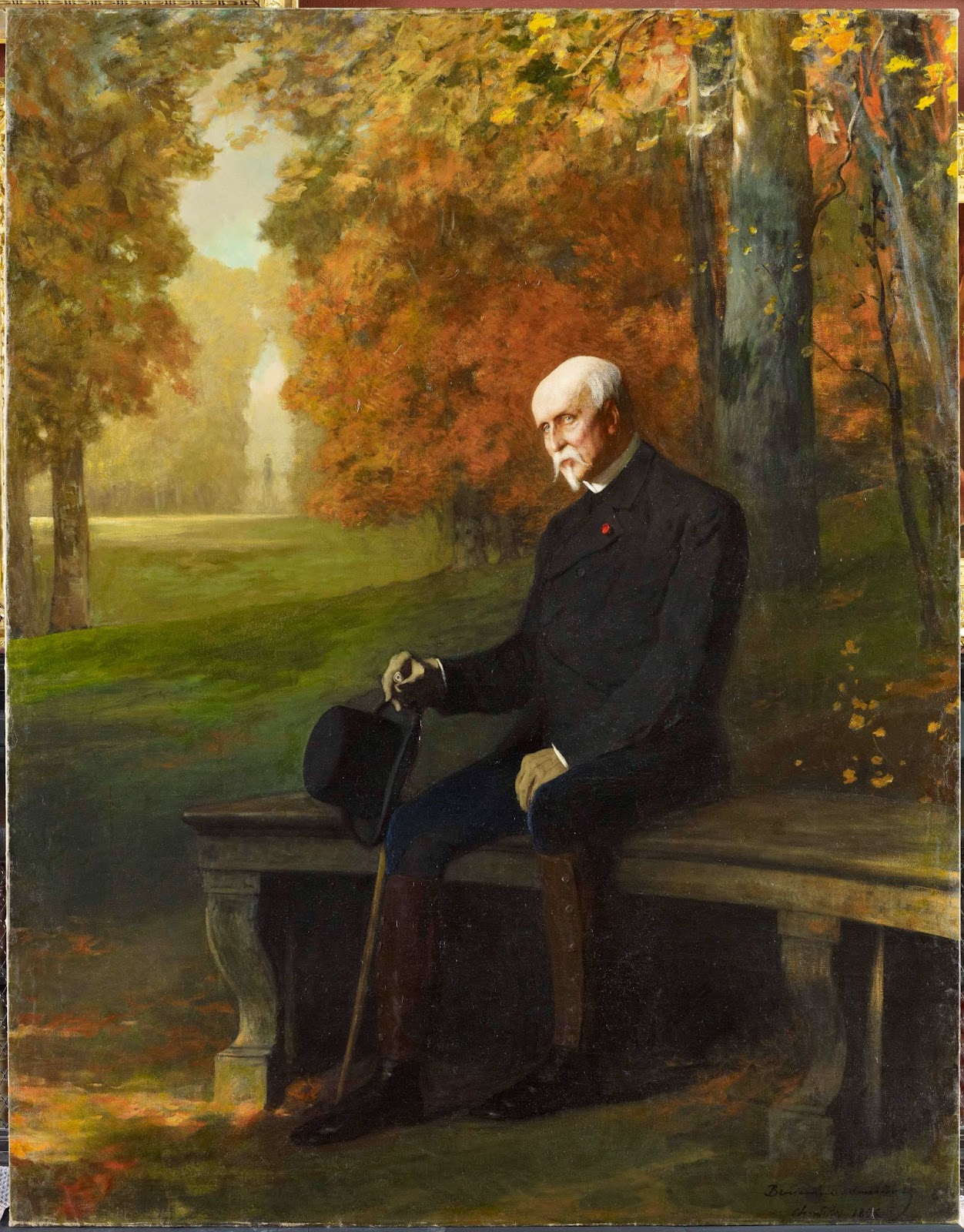 This posthumous portrait depicts a man sitting peacefully in nature. He is portrayed as an elegantly dressed, distinguished, prosperous bourgeois of the times, not as a merchant going about his daily business. Pierre Préfontaine died in 1897 at barely 55 years of age. For his children, the significance of the portrait was twofold. The realist foreground was a treasured testimony to the physical presence of the father from their youth, while the background’s dreamlike scenery had the power to serenely evoke the absence of a father gone too soon from their lives.

2. The inscription Nestor Préfontaine seems recent, and we have not come across an explanation at this stage of our research. However, we are certain of the identity of the portrait’s subject thanks to Leduc’s inscription on the back of the photo he took of his painting: Mr.Pierre Préfontaine at the home of his daughters Eva and Marie-Anne Montreal. Québec National Archives in Montreal, Ozias Leduc Fund (MSS327//12/1; 2006-10-001 \2461). Leduc uses the first name Marie-Anne; Préfontaine’s daughter had been baptized Marie, Anne, Virginie, Léa; however, she signed her correspondence Anne-Marie. See previous note.

3.Leduc likely saw this portrait while visiting Paris from May 25 to December 25, 1897. The large-scale Portrait of the Duc d’Aumale was on display at the Salon des artistes français, the Salon for French artists that was held at the Palais des Champs-Élysées from April 20 to June 11. Also, when returning home, he almost certainly packed the exhibition catalogue or a copy of the Gazette des Beaux-Arts magazine (May edition: Salon report), both of which included an engraved reproduction of the portrait by Charles-Albert Waltner (1846–1925).