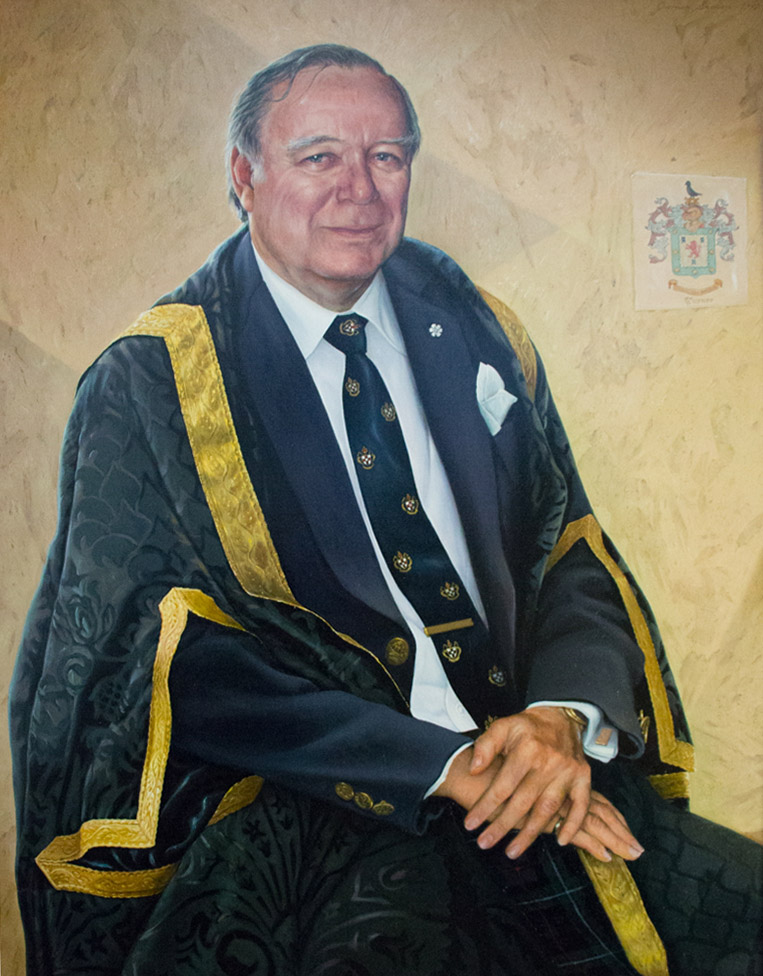 Please note that the paintings are presently on view in our Toronto gallery.
Click here for directions, opening hours and contact information

Carving a long and distinguished career, William I.M. Turner Jr. made important contributions to the spheres of business, community services, education and the arts. He grew up in Toronto, where he earned first a degree in engineering from the University of Toronto and then an MBA from Harvard Business School. A father of four, active stepfather of three and grandfather of 21, he led as full a family life as he did a professional one.

After moving to Montreal in 1954, Turner worked for Ingersoll-Rand, then was President of Power Corporation of Canada, and finally led Consolidated-Bathurst for two decades as Chairman and Chief Executive Officer whilst also serving on numerous boards of major Canadian and international corporations. Beyond business, Bill Turner served as Chancellor of Bishop’s University 1987-1995, was an active supporter and promoter of the arts, particularly the Canada Council’s Musical Instrument Bank, which he cofounded with Denis Brott, and the Stratford Festival, where he served as Honorary Treasurer and sponsor of a number of productions.

Among Mr. Turner’s greatest legacies was his ability to demand and inspire high standards, particularly in education, treating all with decency and respect. As a collector of fine art, Mr. Turner was a gentleman of discerning taste. His art collection was extensive and represented a diverse number of artists, primarily Canadian ones. He recognized the aesthetic virtues of Albert Robinson and his contribution to a truly Canadian art at its inception, and that he was an artist not as competitively collected as many others.

Mr. Turner elected to amass the largest and finest collection of works by Robinson. His friend, investment guru and celebrated art collector, Stephen Jarislowsky, encouraged this approach. My father, Walter Klinkhoff, who without reserve claimed Robinson as his personal favourite Canadian artist, alerted Bill when outstanding works by Albert Robinson became available. Canadian art enthusiasts are offered herewith the opportunity to purchase from a selection of Albert Robinson paintings, outstanding in number and quality of painting.

Robinson was a highly important and modern artist of his day and recognized accordingly. He was a participant in the first Group of Seven exhibition in May of 1920 and was one of the “modern artists from Montreal closely affiliated with the [Beaver Hall Group]” (Desrochers, 90), whose work was selected for its inclusion in the landmark British Empire Exhibition at Wembley in 1924 “where the modern artists stole the show.” (Desrochers, 90). In Paris in 1927, The Open Stream was acquired by the French government. By that time, according to Jennifer Watson,

[Robinson] had already gained considerable recognition through Canadian galleries’ purchases. In 1926, Robinson exhibited at the Sesquicentennial International Exposition in Philadelphia, winning the Bronze medal; two years later his painting Sunny Day, La Malbaie won the Jessie Dow prize at Montreal. Further shows in Atlantic City, Buenos Aires, Buffalo, Pittsburgh and Saint Louis, not to mention important Canadian shows, confirmed Robinson’s reputation. He was likewise a founding member of the Canadian Group of Painters which developed from the Group of Seven. But it seemingly was in 1933, after just thirteen years, that Robinson’s career ended abruptly: he suffered a heart attack with ensuing complications. (Watson 19).

Of my generation, Jennifer Watson curated an excellent exhibition of 1982-1983, Albert Robinson: The Mature Years under the auspices of the Kitchener-Waterloo Art Gallery. Presumably budgetary constraints at the time restricted her generously illustrated catalogue to black and white images, an injustice to an appreciation of such a brilliant colourist. She concluded her eleven page bilingual text, commenting on the the dearth of study of Robinson, wrapping up her biographical essay by stating, “He died as recently as 7 October 1956 in Montreal. Since then, Robinson’s work has largely been neglected… It is only hoped that ‘Albert Robinson: The Mature Years’ marks a beginning in further reassessment of this distinguished landscape painter’s art.” (Watson 20).

For all intents and purpose, 35-years-later none has taken up the challenge or opportunity she implied with her outstanding exhibition. In Robinson’s day, his paintings were admired, recognized and collected by tastemakers of his time. In addition to the purchase by the Musée D’Orsay, his paintings were purchased by the Art Gallery of Toronto and National Gallery of Canada in 1926, and subsequently the Art Gallery of Hamilton, the Musée du Québec as well as the Montreal Museum of Fine Arts. Dr. J.M. MacCallum and Col. R.S. McLaughlin were early collectors of Robinson’s paintings. We are not alone in our adulation of Albert Robinson: Commenting on ‘Returning from Easter Mass’ in his booklet Canadian Picture Study, Arthur Lismer said: "Albert Robinson is a colorist of the first order. There is a wealth of graceful harmony in this simple picture that only comes into a work of art when the painter is sensitively aware of more subtle delicacies and qualities unknown - because unseen - to painters of less discernment." (Lee cited in Klinkhoff 1994).

Veteran art collectors among our audience may have previously bumped into my late father’s position about Robinson. In a non-selling tribute Eric and I organized at Galerie Walter Klinkhoff in 1994, in the preface to the show, Dad wrote: “I always held Albert Robinson in the highest esteem. He has been my personal favorite Canadian artist and I would rate him amongst the very best.” (Klinkhoff 1994). By A.Y. Jackson’s own admission, he was influenced by Robinson. In Dr. Jackson’s words, “I learned a lot from Robinson. I used to waste a good deal of time in hunting about for ready-made compositions. Robinson would sit and wait for effects of light, and then he would push fishing schooners and market carts and such things about on his canvas to arrange a composition.” (Jackson 18).

In my opinion and during my professional career, I have thought and continue to think Albert Robinson an artist not yet appropriately championed by either our museums or the marketplace. There are perhaps several reasons why a comprehensive study and appreciation of Robinson’s artistic contribution and life have yet to be properly explored. Perhaps it may be because Robinson’s maturity and career were quite brief, essentially from 1919 through to the mid-1930s. There exist neither immediate family and offspring nor archives, making thorough and merited research a significant challenge compared to that of other, even less significant, artists. Since his painting place is the same as that celebrated in the most popular paintings of A.Y. Jackson and Clarence Gagnon, Robinson’s career is overshadowed by their more prominent exposure. That Robinson was not part of the Group of Seven, thereby not benefiting from the promotional ability of the Group and participating in their subsequent acclaim as pioneering Canadian artists, he remains undefended and unheralded relative to his quality and importance in the Canadian narrative of his day.

Looking at our selection of Albert Robinson paintings, and regardless of exhaustive analysis and research, they speak volumes of their own. One cannot help but concur with Robert Pilot’s observations,

The vision of the world which Mr. Robinson brings us is distinguished and evocative [...] We see nature with rechristened eyes. His vision of colour is most distinguished and subtle. [...] Ignoring the trivial, he shows us the essential. From his sparsest sketch to his largest canvas, there is a feeling that all is completely stated and the magic of unity achieved. (Robert Pilot cited in Klinkhoff 1994).

As we indicated above, there is little firsthand documentation about Robinson and almost none from Robinson directly. The closest to a firsthand account of Robinson are in the writings of A.Y. Jackson, his painting companion from as early as 1911 when they went to France together. Together, they later discovered the painterly virtues of Quebec in winter on the south and north shores of the St. Lawrence from 1921 and until Robinson, for reasons of poor health, could no longer paint, sometime around 1933. Despite A.Y. Jackson’s categoric claim that Robinson did not paint at all after his heart attack in 1933, it seems that he did so occasionally although unfortunately yielding a result handicapped by arthritis and additional complications following his heart troubles.

A Painter’s Country: The Autobiography of A.Y. Jackson was published in 1958, some 25 years after Jackson and Robinson had last sketched together and it contains numerous references to his friend. This is a valuable resource in any appreciation or study of Robinson. In McMichael Canadian Art Collection: One Hundred Masterworks, Joan Murray wrote about St. Joseph (Fig. 1), a Robinson painting in the McMichael Canadian Art Collection and one of the most-often reproduced Robinson paintings: St. Joseph, considered one of his finest works, shows Robinson’s gift for pairing form to essentials and for unifying his design through his lyrical sense of colour.


St. Joseph, 1922 © McMichael Canadian Art Collection (This painting is not for sale).

He enjoyed painting the villages of the lower Saint Lawrence tucked firmly into the rolling hills and snow, with trees like punctuation marks. He handled his subjects boldly - broad painting was his forte, as was a sense of happiness. ‘There was always an air of contentment about his farms and villages’, A.Y. Jackson once wrote.


Jackson’s influence on Robinson has always been clear. Jackson’s rolling rhythms to the hillside, the view across the landscape, became characteristic of Robinson’s work also. What Robinson introduced was an unusual, even suggestive, but elegantly restrained colour sense - greyed-pinks, corals, off-beat greens, blues, and purples. His skies are coloured boldly and sometimes unrealistically (here, pale green) and he orchestrated the effect of space. He was more concerned throughout his painting career with the creation of a simplified, powerful form than with carping detail (Murray 164).

May I note respectfully, however, that it is not 100% clear to me that the influence Joan Murray describes is other than the influence of the landscape Jackson and Robinson were painting together and the composition it implied to them both. Our motive for including her excellent description of the importance of St Joseph is to suggest that if we juxtapose images of any one of four major Robinson paintings offered in this sale from the estate of the late Mr. Wm. I.M. Turner Jr. - Snow Scene, Bienville (1922), Winter, Lower St Lawrence (1923), Quebec (1922) or Ice and Houses, La Malbaie (1922) - in our opinion, her eloquent description would be equally applicable. Such is the quality of the selection we have available for sale.