Morrice's Only Known Major Canvas of Canada in Summer 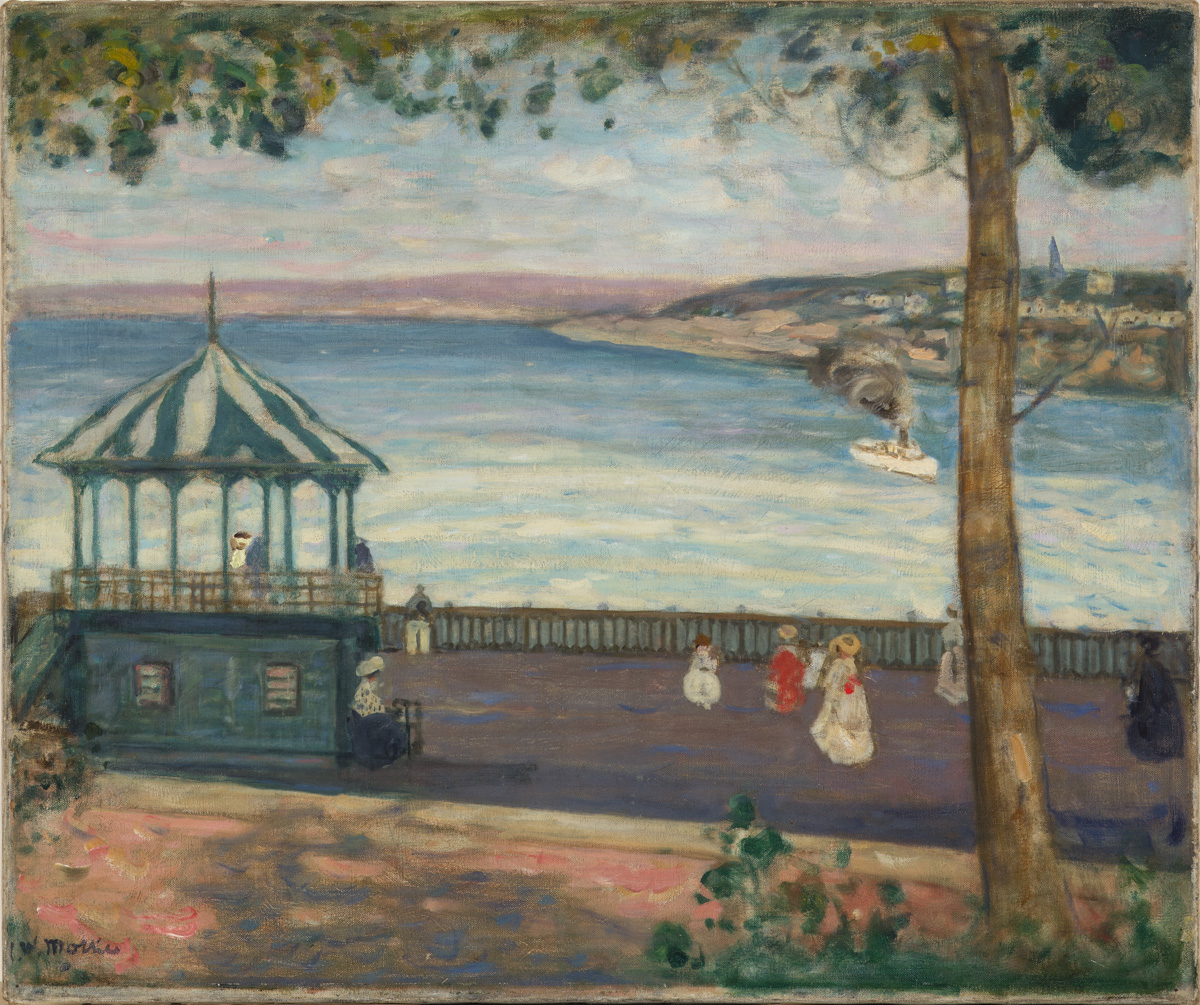 James Wilson Morrice was born in Montreal, lived in Paris and travelled half the world, but each time he crossed the Atlantic he found time to visit Québec City and nearby Côte-de-Beaupré. Most of his Canadian subjects are winter scenes, since he usually came home for Christmas. Only one important canvas can be associated with a summer trip, The Terrace, Québec.  There are a few smaller works;  A view of the Humber River in Toronto is dated 1894 by its first owner, a college friend of Morrice; a two-month stay in the summer of 1903, during which Morrice spent some time at Beaupré with Maurice Cullen and Edmund Morris, did not seem to have inspired him at all. 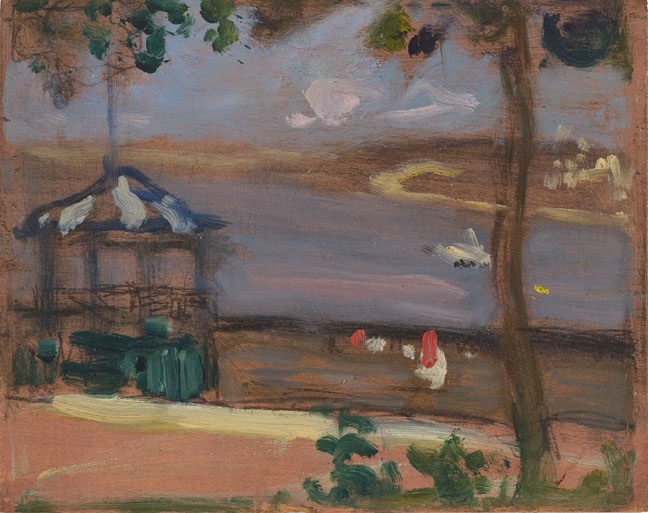 The third known summer trip, in 1910, was slightly more productive, since Morrice painted at least two sketches: a portrait of his friend William Brymner at home in Saint-Eustache, near Montréal (Montreal Museum of Fine Arts), and a view of the Terrace with the Kiosque à musique from the Parc des Gouverneurs, which the artist developed into the present canvas. A third sketch perhaps also dates from that trip, a nocturne view of the Château Frontenac and the Dufferin Terrace (private collection.; see Montreal Museum of Fine Arts Retrospective Exhibition, cat. 24, wrongly dated 1897). On June 14, 1910, David Morrice Sr. and Annie S. Anderson celebrated their Golden Wedding Anniversary. Their son, of course, had every intention of attending, since he wrote down the name of three ships leaving Europe for New York in early June (Montreal Museum of Fine Arts, Sketchbook #15, p. 58). He finally boarded the “S.S. La Lorraine” at Le Havre on the 11th, disembarking in New York on the 17th and probably reached Montreal the next morning… Too late! He stayed in Canada until the end of July, returning via Boston and Liverpool. The canvas The Terrace, Québec was painted in Paris, in time for the annual exhibition of the ex-Société Nouvelle group, which opened in March, 1911. Two years later, Parisian dealer Bernheim-Jeune included it in a group of “French Impressionists” at the Secession exhibition in Rome, where it was hung besides a Matisse. It arrived in Montreal in 1914, as a gift to a private club. Since then, it has been part of every major Morrice show and has been lent to many others, which makes it one of the best known works by the artist. 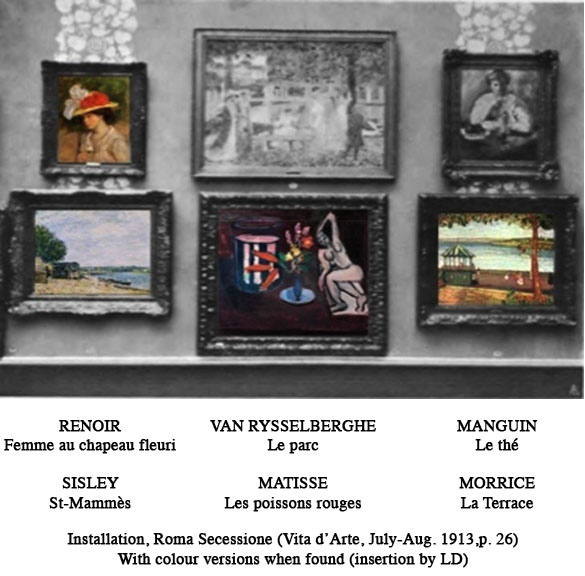 The sketch was painted very quickly, no doubt because the artist was already familiar with the subject. He had drawn it in the winter of 1906 (Montreal Montreal of Fine Arts, Sketchbook #16 p. 50) and again three years later, in late January 1909 (Montreal Museum of Fine Arts, Sketchbook #15 p. 26); that time he also recorded the colours on a small panel (National Gallery of Canada inventory no. 3192), on which he based the beautiful View Towards Lévis from Québec, which premiered at the Salon de la Société Nationale (Paris) in Apri 1909.

It was cold that January, and even if Morrice stayed inside to paint the National Gallery's sketch, it bears witness to the weather: few colors, few details. In the summer view, the paint flows more freely, the colours are more varied. At this point in his career, Morrice used his sketches as aide-mémoires: in very few brushstrokes he noted the music kiosk, the tree, the Lévis shore. The grass in the park was perhaps still yellow, so he left the wood bare, and its color complement the green foliage. He gave slightly more importance to the center zone, the river and the little boat. The composition of the canvas follows the sketch, but the result is totally different. Unlike the strict horizontal compositions of the 1909 View towards Lévis from Quebec or of the many paintings of the Quai des Grands-Augustins in Paris that Morrice had painted since 1904, here the main lines are slightly askew, especially the Lévis shore.

This dynamism is heightened by the strong but very bright colours: unlike Morrice’s usual “atmospheric” landscapes, this canvas is full of life and joy, somewhat reminiscent of the paintings of the Fauves that Morrice had seen at the 1905 Salon d’Automne. But Morrice could not totally renounce his Anglo-Saxon Protestant temperament: the foliage is artificially extended over the whole length of the canvas, keeping the top of the composition on the surface, and it looks as if he had used a ruler to draw the railing and the sidewalk. The kiosk, which in reality is located on the grass and not on the terrace, is also brought into line... and was perhaps based on a photo to get the details. This is expected for a composition where the overall effect is more important than the parts. The result is beautiful, a ray of sunshine in Morrice’s Canadian output.