Morrice, Lyman and Matisse on display at McMichael

Last Thursday my father, Alan, and I attended the lenders evening for the exhibition Morrice and Lyman in the Company of Matisse at the McMichael Canadian Art Collection in Kleinburg, Ontario. This formidable exhibition is the latest in a series of significant research-based projects originating from the Musée national des beaux-arts du Québec (MNBAQ) and the final one by award-winning curator Michèle Grandbois, who has since retired.

This was my second exciting visit to the exhibition, following the lenders evening in Quebec City earlier this year. Here at McMichael, it offers viewers in the Toronto area a rare opportunity to see together a large body of work by three highly important figures in modern art.

The itinerant expatriate James Wilson Morrice, who is sometimes referred to as "Canada's first modern artist" and whose paintings were internationally collected in his day, has always been a particular favourite of ours (and, it should be noted, of many the foremost connoisseurs and collectors of all generations). About sixty of his paintings are on display, including a number that we are proud to have transacted over the years. Today, Morrice's paintings are some of the rarest and most sought after treasures in our field.

Henri Matisse was one of the true luminaries of 20th century art. The opportunity to see about a dozen Matisse paintings (and drawings!) in a Canadian museum is not to be overlooked.

For even the more experienced observers, a true revelation of the show may be the influential (and sometimes abrasive) art critic and painter John Lyman. Lyman was the founder of the Contemporary Arts Society and played an important role in propelling the vision of Canadian artists beyond the "national" horizon established by the Group of Seven. Lyman influenced some of the foremost Canadian artist of the post-war period, some of whom found themselves contemporary with international art currents, a group that includes Guido Molinari and Jack Bush. 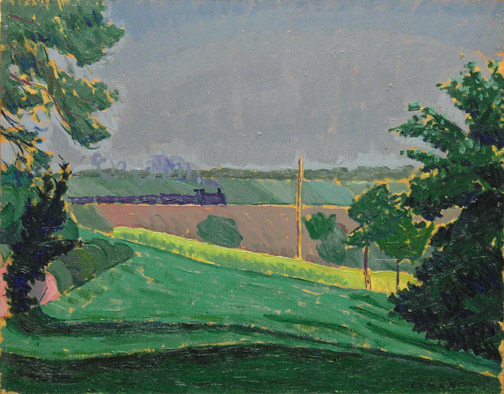 We are accustomed to outstanding research from the MNBAQ and the catalogue accompanying this exhibition is consistent with its previous publications. Leading scholars were drafted in for the project, including Lucie Dorais, the author of the James Wilson Morrice Catalogue Raisonné, and the chapter on Lyman was penned by François-Marc Gagnon, author of the Paul-Emile Borduas Catalogue Raisonné.

In attendance were lenders and collectors, dealers, curators from the National Gallery of Canada, the Montreal Museum of Fine Arts, and officials from the MNBAQ.

Congratulations to the McMichael and Dr. Victoria Dickenson, its Executive Director and CEO, as well as chief Curator Katerina Atanassova, for bringing this exhibition of outstanding paintings to Ontario. Atanassova will be moving to the National Gallery of Canada to take over as Curator of Canadian Art.

We also salute Michèle Grandbois, with whom we have worked on many occasions over the years. Michèle's past contributions include "Marc-Aurèle Fortin: The Experience of Colour", which traveled from Quebec to McMichael in 2011, the same year she received the Canadian Museums Association Award of Outstanding Achievement in Research for the exhibition The Nude in Canadian Modern Art: 1920-1950.