In this recently sold, exquisitely painted watercolour of an early Montreal autumn one immediately remarks at James Duncan's characteristic interest in atmospheric skies and his outstanding ability to paint them. 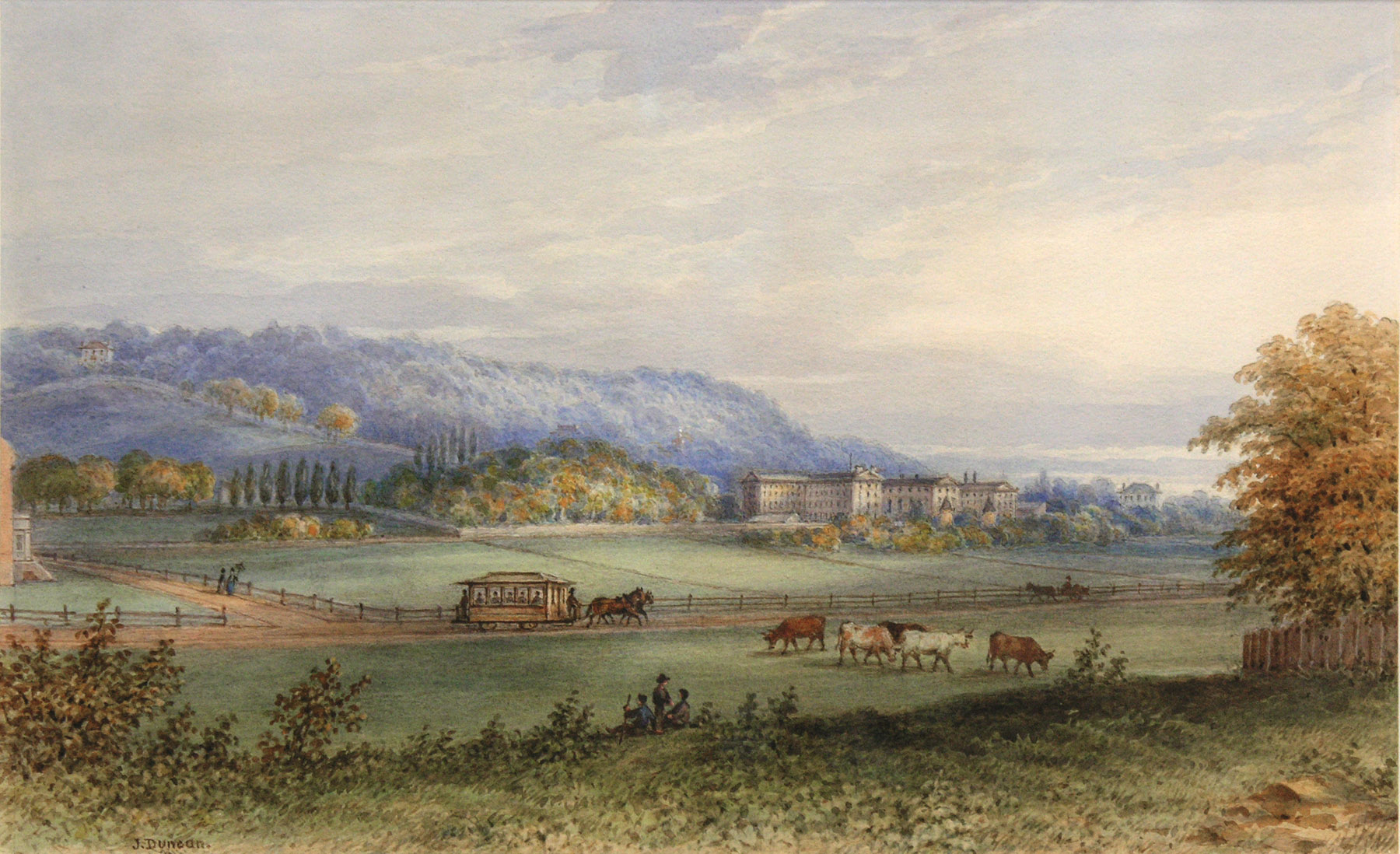 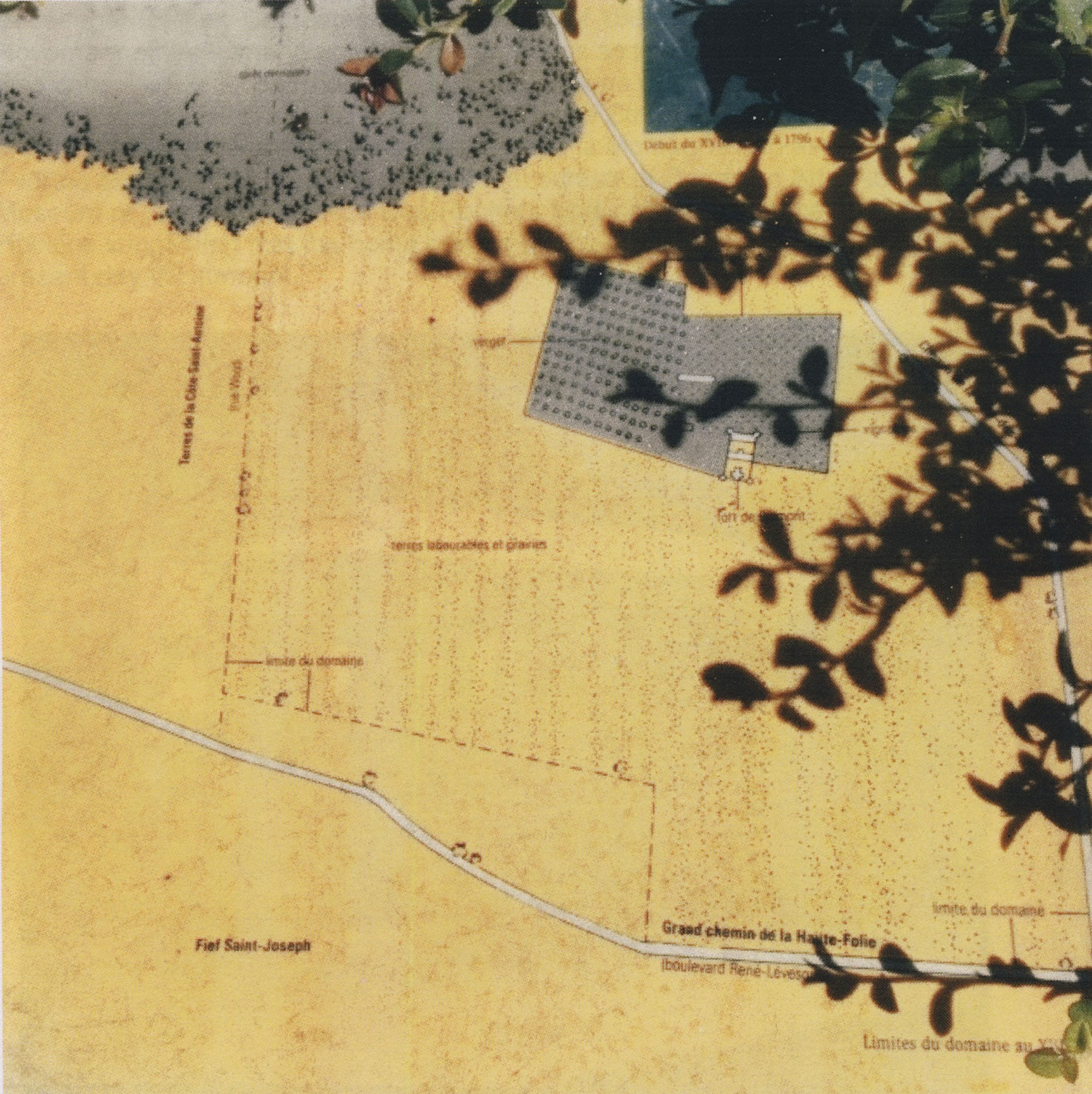 Earlier maps of the Sulpician property Duncan's watercolour provides a rare glimpse into Montreal's history through the eyes and hands of first rate 19th century Canadian artist.   He portrays "The Major Seminary of Montreal” in a way aptly described in The Sulpicians of Montreal 1657-2007: “With Mount Royal in the background, the building spread(s) majestically before the Sulpician’s vast estate” (pg 610).  The same publication shows evidence that the building featured in our Duncan includes the addition for the Collège de Montréal, only completed in 1870, thereby confining the date of our watercolour to sometime between then and the death of the artist in 1881. The image above is a map of the Sulpician property from its earlier incarnation as Fort Belmont or Le Fort de la Montagne, before some of the pieces were sold off.  (Please forgive the shadows of trees but I shot this outside at the property itself on a presentation panel while cycling along Sherbrooke Street to the office.)

Here, in the pre-seminary days, the property is bordered by present-day Cote des Neiges to the east (right), what is today Réné Levesque to the south (bottom), and at the western edge (left) Wood Avenue. Since much of the oeuvre of Duncan includes views from Mount Royal overlooking the City of Montreal, this reverse vista is especially attractive.  This in itself highlights the significance of the composition to the visual history of Montreal of the period. 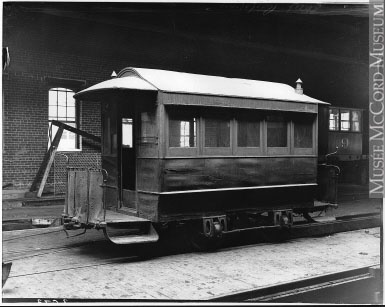 This is very much the trolley we see in the Duncan The imagery of this horse-drawn trolley tweaked my curiosity and through the miracles of the internet, with the help of an excellent web site of the Société de Transport de Montréal (STM), I quickly discovered that this Duncan is also a rather early and brilliant depiction of Montreal's first public transportation system, a horse-drawn tramway operated by The Montreal City Passenger Railway Company (MCPRC).  The MCPRC was created in May of 1861 and the inaugural service was in November that same year.  With the generous assistance of the archivist at the STM who consulted Jacques Pharand’s La Belle Époque de Tramways we were successful in determining that the tram Duncan painted ran the route along St. Catherine Street.  Rails were installed around 1865, originally to De la Montagne but by 1872 these had been extended as far west as Greene.  Jacques Des Rochers, curator of Canadian Art at the Montreal Museum of Fine Arts and an expert in Sulpician Architecture, kindly made reference to an 1879 Hopkins map, which leads us to the probable conclusion that the home at extreme left is in fact on Wood Avenue in present day Westmount.

Very much the same trolley, but outfitted with skis for winter. We suspect that one of the trolleys above is the one featured by Duncan.  Manned by a driver in the front and conductor in the rear, the latter selling the tickets or collecting the five cent fare, "[p]eople simply hailed the tramway to have it stop and pick them up and they could even ask the driver to wait a few minutes for them!" (STM.info)  As an amusing footnote, the practice of waiting for passengers was halted in June of 1865.   The system quickly became popular, carrying 1,000,000 passengers in its first year and in a city with a population of slightly over 100,000 people. Seven years later it doubled its capacity. Around the time James Duncan caught this tramway in action the MCPRC had a stable of 400 horses and over 100 vehicles of three different types, their usage depending upon the season and weather.

The three different vehicles employed by the MCPRC were "the summer tramway, which had open sides, the winter or sled tramway, which was very useful when the rails were covered with snow and ice, and the omnibus, a wheeled vehicle used when the rails were impassable, such as during the spring melt" (STM.info).   By 1894 the network was completely electric and the last of the original horse-powered trams was retired. This time capsule watercolour is a rare snapshot of 19th century Montreal by a great artist of the period.   Capturing the splendour of Mount Royal as seen from what is today Ste Catherine Street West at Wood Avenue, with the MCPRC tram plying its route in early autumn (the sides are enclosed), and featuring the grandeur of Le Grand Séminaire, Duncan has painted an important documentary at the height of his artistic powers.  The result is a triumph of 19th Century urban Canadian painting. It has been a pleasure to represent this important work by James Duncan, outstanding both in quality of composition and conservation, in its recent transfer of custody.

With special thanks to: