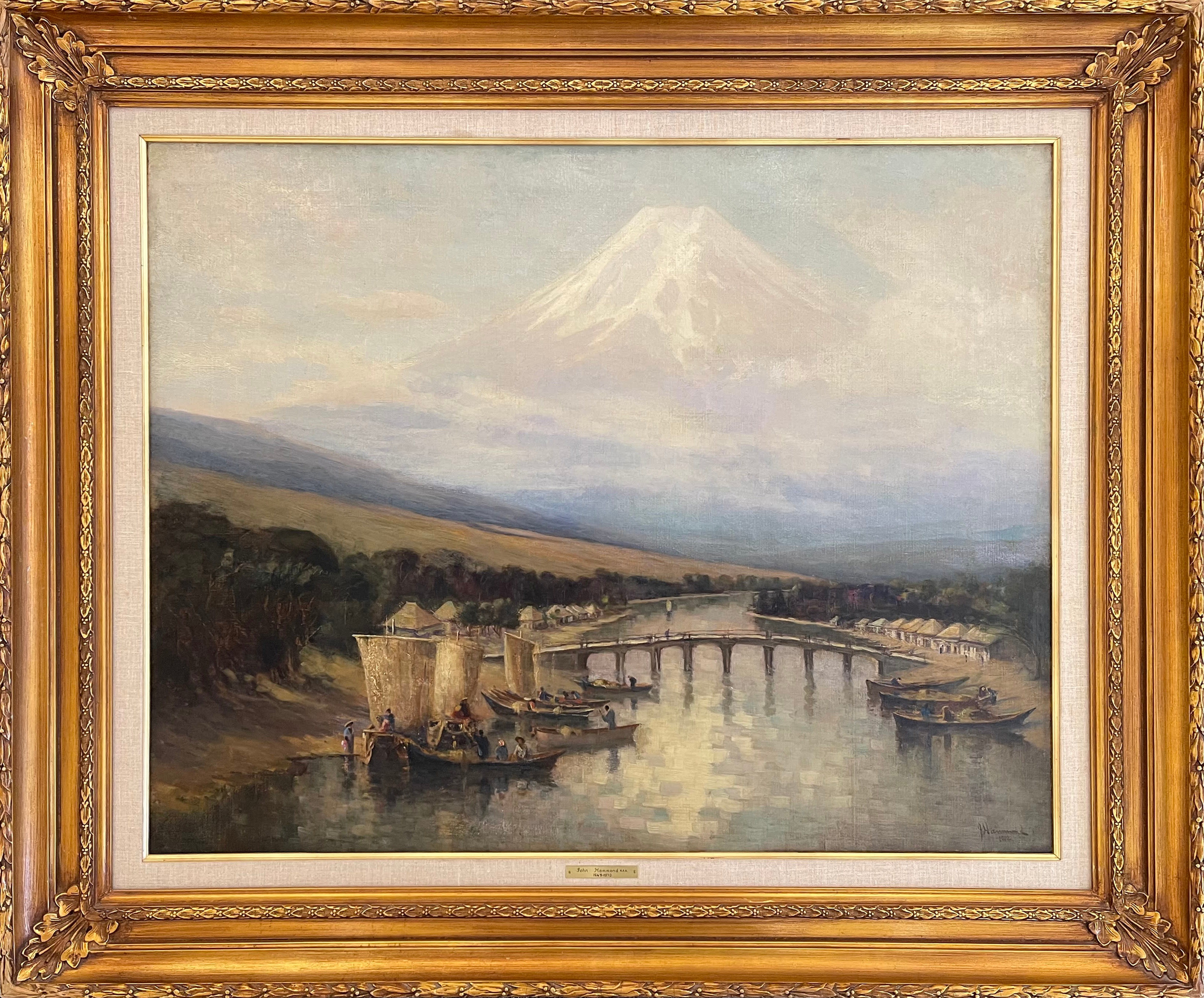 One of the leading artists of his generation, John Hammond (1843–1939) began his career in the years immediately following Confederation, a time of pivotal nation-building for the country and for artistic communities in Canada. Famous for his landscapes, he painted scenes from New Brunswick to British Columbia, from Venice to Japan, yet while his subject matter was wide-ranging, his artistic goals were remarkably consistent throughout his career. He was committed to exploring light and atmosphere, and to building on the foundations of European painting to develop an artistic language that would do justice to a modern world transformed by railways, steamships, and industry.

Born in Montreal, Hammond was the son of a stone mason and as a child he assisted his father at a marble mill. While he later told his biographer that he had decided to become an artist at age eleven, as a young man he pursued adventure.[1] He joined the army at twenty-three, and he was involved in the defense of Canada during the Fenian Raids in 1866. Later that year, he and his brother travelled to Britain. [2] At the time, he had not begun working as an artist, but during his stay he visited the National Gallery, where he particularly admired J.M.W. Turner’s art. Considered one of the greatest landscape painters in British history, he was known for brilliant evocations of light and atmosphere, and years later his oeuvre became an important touchstone for Hammond. At the time, however, he and his brother quickly moved on, travelling to New Zealand and joining the gold rush movement there. He did not return to Canada until 1868.

Hammond’s first critical opportunity to study light in landscape occurred when he began working with photographers. In 1870 he took a job with William Notman, who was then the most successful photographer in the country: his studio in Montreal was internationally admired for artistic and technical innovations. A year later, Hammond’s position as a staff artist led him to join an exhibition of the Geological Survey of Canada that set out to survey potential routes for the Canadian Pacific Railroad to cross through the Rocky Mountains. Hammond was acting as an assistant to photographer Benjamin Baltzly, who was charged with recording landscapes on the journey; in this capacity Hammond was responsible for assisting with the camera and required materials, but Baltzly also worked with him to select subjects and allowed him time for sketching.[3] The photographs the two men took included dramatic views of the Fraser River, a region Hammond would later return to as a painter.

On his return to Montreal, Hammond resumed his work with the Notman Studio, where his responsibilities included painting backdrops and hand-colouring photographs. In this position, he was at the centre of artistic life in the city. Painter and illustrator Henry Sandham was the head of the art department at the time, and several leading painters collaborated with the studio on publications; Notman held exhibitions in his gallery and provided critical support to the Art Association of Montreal. It was an ideal environment for an aspiring artist—as Hammond later noted, “I have never attended an art school […] But I’ve studied with many of the great painters of our time.”[4] These professional connections also enabled him to become more involved in artistic institutions. He joined the Ontario Society of Artists in 1873, and he exhibited there the following year. In 1883 he showed his work at the Art Association of Montreal for the first time, and the following year he exhibited with the Royal Canadian Academy of Arts.[5]

It was his work with the Notman Studio that eventually took Hammond to Saint John, New Brunswick, which became his home province for the rest of his life. He moved there in 1878 with James Notman to help establish a branch of the company. Though he was also pursuing his own art practice, he remained affiliated with them until 1884, when he was offered a remarkable new position. The Owens Art Institution had just been incorporated, with the intention of creating both a gallery and an art school, and Hammond was hired to teach classes and to assist in building the collection. With support from his new employers, he left for Europe with a mandate to acquire works for the gallery.

Hammond’s purchasing efforts were successful—he bought dozens of artworks, particularly by British and French artists—but he also ensured that the trip included time to develop his own practice. In the 1880s, many Canadian artists considered European studies to be essential training, and Hammond was one of several who chose to go to Paris, where there were numerous opportunities for studying the academic tradition in the city’s art schools and galleries, and the French countryside, where many artists were experimenting with new approaches to landscape. Hammond was drawn to rural subjects, like the houses he depicted in Barbizon, near Millet’s Home and Studio. Dominated by soft browns and greys, this small painting has muted tones that suggest an overcast twilight, and in many respects, it is a continuation of his already established interest in atmosphere. At the same time, it is also a tribute to the influence of Jean-François Millet, one of the founders of the Barbizon School; though Millet had died in 1875, Hammond was able to meet his son (who shared the same name), and he was interested in the movement, particularly its conviction that painting the natural world required working outdoors.

Hammond then went on to visit Holland, and there he met James McNeill Whistler, the radical American painter who famously called on artists to gather elements from nature to create harmony in art.[6] He would later describe Whistler as “a marvellous painter,” and in compositions such as Dordrecht, Holland, and his misty depiction of a mother and her two children at the water’s edge, there are echoes of Whistler’s Nocturnes.[7] Before Hammond returned home, he submitted paintings to the most prestigious exhibitions in Europe. Étude was exhibited at the Salon des artistes français in Paris in 1885, where it received the honour of an illustration in the catalogue, and Evening was shown at the Royal Academy in London in 1886.[8] In Canada, these achievements were powerful symbols of professional success and they strengthened his reputation as a painter.

After his return to New Brunswick, Hammond became increasingly known for his marine views, which were seen to be drawing inspiration from Turner’s paintings. The British artist offered a model for capturing the dynamic contrasts of bold waves and ocean skies, and Hammond identified a similar energy in the local harbours and coastlines. His seascapes were both grounded in art historical tradition and in a project to represent Canada; commenting on Hammond’s efforts to achieve this balance, one critic observed that his “Turneresque studies are always interesting, even if they be not drawn from mythology, as the master’s were, but from modern shipping and craft.”[9] For the rest of his life, Hammond depicted the sea regularly, embracing the changing conditions it presented—Inward Bound. St-John, N.B., and Market Slip, St. John Harbour, illustrate the artistic possibilities of capturing the scene in radically different lights. In an interview given when he was eighty-four, he declared that of all his subjects, Saint John was his favourite.[10]

Yet if the Maritimes were Hammond’s most frequent subject, a new commission soon led to a more high-profile body of work. After the completion of the Canadian Pacific Railway, William Cornelius Van Horne, the General Manager, had launched an ambitious program to support the country’s most talented painters in depicting the Rockies with the intention of exhibiting their work in Eastern Canada and abroad to promote the railway’s achievement. In 1892, Hammond and Montreal painter William Brymner travelled west with the intention of creating series of large canvases depicting the peaks.[11] For both men the trip was an extraordinary success: Van Horne was so impressed that he purchased seventeen of Hammond’s canvases—the largest single purchase of paintings from an artist in the history of the company—and exhibited them at the World’s Columbian Exhibition in Chicago in 1893.[12]

In the wake of this success, Hammond’s reputation as a leading landscape painter was confirmed, and in 1893, he was elected a full member of the Royal Canadian Academy of Arts. That same year the Owens Art Institution moved to Mount Allison University, in Sackville, and Hammond went with it. Despite his home there, he remained deeply involved with the artistic communities in Montreal and Toronto. He exhibited regularly in these cities, and he maintained a studio at the Art Association of Montreal. A visitor there in 1895 reported having seen over a hundred pictures on display, noting it was clear that “His style is most varied—wild country, meadow land, sea pieces, mountains, all seem to flow from his brush, if I may use the expression, with equal ease.”[13]

Hammond’s support from Van Horne also enabled him to travel to Asia, as the Canadian Pacific Railway was interested in promoting its global steamship business. In 1900, Hammond visited China, and he was there during the Boxer Uprising; he would later claim that he had been forced to flee the violence and take refuge on a ship. The following year he went to Japan, and the sketches he made there became the basis for several paintings. His Asian landscapes represented iconic sites and they incorporate local symbols, from traditional Chinese junk ships that appear in his depictions of the harbours of Hong Kong and Guangzhou (then known as Canton) to women in kimonos in Ascent to the temple at Niko, Japan. Yet although Hammond was clearly interested in the places he was visiting, he still treated his travels as a chance to continue investigating light and atmosphere and how they might be captured in paint. In pieces like Fuji, Japan, the haze of the clouds and the dappled light on the water are as important to the composition as the mountain itself.

By the early 1900s, Hammond was well-established as one of the most successful painters in Canada. Reviewing an exhibition of his work in 1903, a critic noted that although he had painted all over the world (and was continuing to exhibit international subjects), his views of the Bay of Fundy were particularly important: “he has drawn his inspiration from scenes and moods of nature in that locality. Mr. Hammond excels in depicting the glory, not of direct sunset, but of the after-glow, and most of his pieces are gorgeous in coloring. His skies are aglow with light, and his water reflects the glory of the clouds in every ripple.”[14] Similarly, when Hammond showed his new paintings nearly twenty years later, a reporter reflecting on the exhibition declared “one feels that Mr. Hammond is essentially a painter of the sea and of the harbor, with its shipping, and that his greatest successes are his atmospheric effects, when he fixes on canvas the prismatic beauty that comes from the sunlight struggling through the fog.”[15]

In the final years of Hammond’s life, while he continued to paint the sea and the coast near his home, the radical paintings of the Group of Seven and the Beaver Hall Group were dominating the art world. He offered an interesting reflection on these developments, saying, “We will survive this phase and we cannot tell what may come of it. We have some fine artists in Canada today. We will have more in the future. This modern phase may lead to something definite.”[16] After his death, modernism often overshadowed his work, but those exhibitions that have presented surveys of his paintings underscored what his peers had recognized. In a career that spanned over five decades, he had remained committed to investigating light, exploring its interactions with clouds and mists, mountains and harbours, waters as still as glass and waves of extraordinary vitality and motion. In doing so, he had created a remarkable body of work whose subject matter is grounded in the cultural geography of his lifetime but whose form and style is refreshingly lively even today.