In 1918, while recovering from his recent nervous breakdown, Lawren Harris began to focus on a new architectural subject: recently constructed houses in Toronto’s unplanned, blue-collar suburbs. Located just outside city limits, these unregulated settlements were widely known as “shacktowns.” In 1920, one art critic described the artist as the “first man in Canada . . . to glorify shacks.” A favorite suburban area for Harris was Earlscourt, a rural neighbourhood that had been under incremental development since 1906. Located at the western end of the St.Clair trolley line on rolling farmland north of St. Clair Avenue, west from Dufferin Street to Prospect Cemetery, it stretched north toward Eglinton Avenue. In 1910, under political pressure from settlers demanding access to the same city services available to the seedy downtown neighborhood known as the Ward, the city annexed the southern part of Earlscourt. But by the time Harris began to sketch houses in the area, the dwellings scattered among vacant lots had yet to be properly supplied with streets, sidewalks, sewers, water, gas, electricity and, except for a trolley line along Rogers Road, public transportation.

The people who occupied the outer fringes in the early 1900s were newcomers, waves of working class immigrants from crowded British cities. Between 1901 and 1911, they helped swell Toronto’s population from some 280,040 to 381,383. On arrival, they discovered available living space in the city was severely limited. There was a housing crisis: the slums in the east end were filled, rents in the squalid downtown Ward were exorbitant and prices for existing houses were out of their reach. As a consequence, these English, Scots, Welsh and Irish immigrants were forced beyond city limits, buying cheap land available to the north and west and, although unskilled as builders, constructing their own homes as quickly and inexpensively as possible. These new pragmatic settlements were entirely unplanned and unregulated by any municipal government: no building permits were needed; no fire codes had to be followed. At the same time, there were no city services. Initially, many family homes were simply two room, tar paper shacks (hence the name) constructed on 25 foot wide lots, but early examples were more weather-resistant, wooden structures built by their owners with the help of friends and neighbours. Shapes, sizes, conditions and materials varied widely. An unpainted, two story frame house with a gable roof might rise next a small, cube-like shed amidst a sea of vacant lots, here and there dotted with other rudimentary dwellings. But for these working class immigrants owning a home with a garden in a healthy, outdoor environment had been a firmly-held dream.

In 1909 journalist Augustus Bridle praised the “sociability” of shacktowns. Within them, there was a palpable sense of community. The inhabitants knew and cooperated with other, unlike those in the downtown Ward where there was little friendly communication between ethnically diverse households. “The shacks may be rude and some of them rickety; some only half built, and most of them shells,” Bridle wrote; but there was “hope” in a shack, whereas there was none in an inner city “hovel.” As the Toronto Star similarly emphasized in 1911: “The slum dweller is in a slough of despond. The dweller in the outskirts is making headway . . . and is hopeful of the future.” Even though many suburbanites were forced to survive on charity during downturns in the local economy, the British newcomers were typically praised in the press for their “industry and their fine steadiness of character,” and as their economic conditions improved, their first dwellings — like the log cabins of earlier pioneers — were replaced by better constructed homes. In fact, in 1911 Earlscourt was described as “a model of its kind — its sturdy population of 500 an unanswerable argument in favor of cheap land for cheap houses in the outskirts.” Yet, no matter how upgraded suburban houses and settlements became, in the early 1920s the owner-built creations were still referred to in the press as “shacks” and often condemned for their “ugliness.”

Harris exhibited his first suburban canvases at the 1919 OSA show: Shacks, Earlscourt (possibly Outskirts of Toronto, 1918, private collection) and his large sized Shacks, Lambton (Shacks, 1919; National Gallery of Canada). In comparison, he showed three, more familiar paintings of Ward houses. In the first Group of Seven exhibition held at the Art Gallery of Toronto in 1920, he showed his Lambton suburb Shacks for a second time, as well as three other city pictures. In the catalog, it was priced at $1,000 — four hundred dollars more than the artist’s next highest priced picture. In the second Group of Seven show the following year, Harris included another shack painting, The Fringe of the City (possibly January Thaw, Edge of the City, 1921, National Gallery off Canada) and two more paintings of inner city Ward houses. In the third Group of Seven display in 1922, after his trip east to Nova Scotia and Newfoundland the previous year, the exhibited his two dark and damning visions of poverty in Halifax, Elevator Court and Black Court — along with a single Ward composition and the sunny Spring in the Outskirts, an upbeat suburban scenewith a cloudless blue sky, green grass and yellow wildflowers. 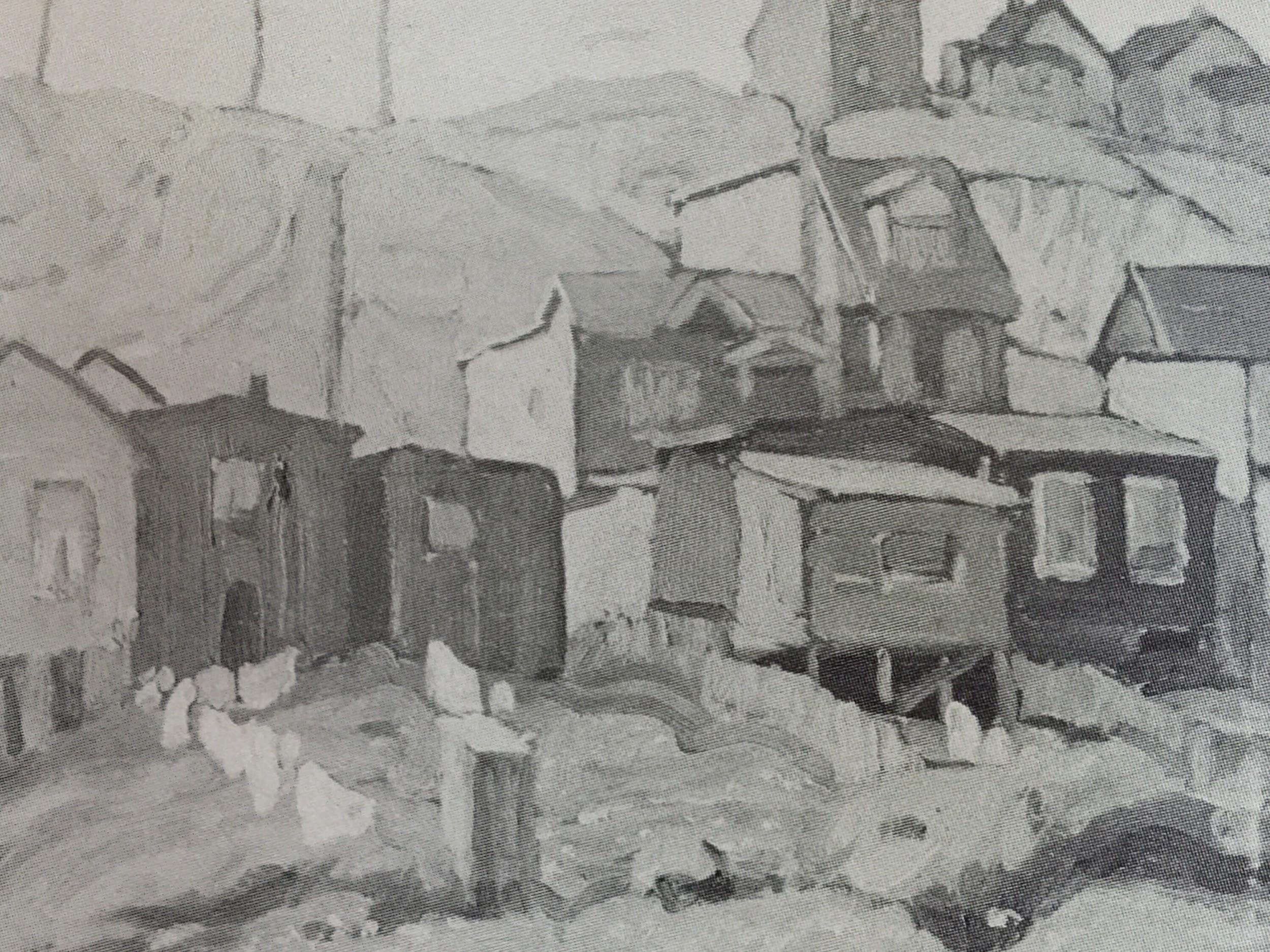 The canvas was based directly on a small oil sketch of 1921, Shacks, Earlscourt (private collection, Fig. 1), one of several studies of the neighborhood he made that season. It depicts an assortment of simple, owner-built houses in a hilly section of the suburb, possibly north of the 1910 annexation line in a still-unregulated area also known as Fairbank. It was not deemed a picturesque neighbourhood. In 1921, during a period of ongoing economic depression, the Toronto Globe reported that the “shacks” under construction north of Earlscourt proper were “a disgrace to any civilized community.” Unlike the vast majority of Harris’ previous city paintings, as well as his recent “shack” compositions, Spring on the Outskirts was not structured in receding layers placed parallel to the picture plane. His usual, rather decorative formula of arranging the facades of buildings frontally was abandoned in favor of viewing the varied architectural forms from an oblique angle. As well, the artist included many more buildings — some eleven “shacks” are visible — than had previously been the case. The untidy collection of structures in their hilly setting represents the scattered character of Toronto’s unplanned suburbs, so different than the regulated and ordered ranks of residences on city streets.

In 1922 Harris published his book of poems, Contrasts, in which he revealed an essentially pessimistic view of humanity, one in which the experience unrelenting poverty — without an uplifting encounter with beauty — was spiritually degrading. Yet, as an artist, for a variety of reasons he was deeply attracted to the houses of the poor. Before 1918, the flat-patterned, often sunny Ward pictures were primarily decorative in character, admired by many for their picturesque “charm.” However, in the economically difficult years immediately after the war — and in the wake of the artist’s own emotional and spiritual crisis, evidenced in Contrasts — a new moodiness appears in many of his house pictures, feelings of melancholy, isolation, even depression. These moods typically were expressed through changes in colour, texture, form and especially the use of gloomy weather effects. A reviewer of the 1922 OSA show noted the “subtle sentiment” in Harris’ inner city painting, Morning, 1921 (Beaverbrook Art Gallery), that “convey[ed] with much feeling the squalid surroundings of an old house in the slum district.”

In Harris’ mind, the miserable houses of the underclass that he painted in 1920—23 were external representations of the damaged inner lives of their inhabitants, symbolic surrogates for the downtrodden themselves. Although a scion of wealth, he clearly had a strongly emphatic social conscience, one certainly displayed in his anguished Halifax canvases of 1921. But the recognition of severe, socio-economic inequities, and the reasons behind them, did not lead him to take political action, but rather to make critical — if implicit — statements artistically.

A journalist reviewing the 1922 Group of Seven exhibition that included the Halifax slum dwellings and paintings of seedy Ward houses — as well as Spring in the Outskirts — noted: “[Harris’] squalid studies of city homes, even when the colour is bright like that in ‘Spring in the Outskirts,’ might be taken as social propaganda. . . . Mr. Harris runs strongly to ugliness in selecting his subjects.” Continuing, he insightfully stated: “[but] it is the idea, not the fact, of destitution and dirt that attracts Harris. He has no idea for the sordid details of squalor.” Instead, his buildings were “the stark sort of house that tells the story; a mute revelation of poverty in which you rarely behold people.” In 1925 Harris wrote that when painting a specific dwelling, like those in the Ward, he figuratively “assume[d] the shape of that particular house, experience[d] its form, its meaning, its relationship to the soil it rises from, the skies that bathe it in reflection of the colors and mood, the neighboring houses, the mood of the particular house, its age, its inner life; and the more direct my experience of that is, the more certain I am to arrive at pure experience in my art and to create an intense equivalent in terms of my first-hand experience. If my experience is clear and deep enough, the life I get in my picture . . . will become universal.” Harris intended his depictions of shabby houses would transcended their specific identity to embody general ideas of impoverishment, material as well as spiritual.

In contrast to his moody house paintings of the early 1920s, Spring in the Outskirts is a cheerful, sunny image, described by one critic as “a screaming jangle of cockatoo colors against the green of spring.” It expresses the “hope” of working class Earlscourt, the “model” suburban community. While financially burdened, and relying on relief funds in 1921, the “industrious” inhabitants of the pictured “shacks” were not impoverished spiritually. Representing the ”wholesome” character of the settlers, a symbolic figure appears in the otherwise unpeopled scene: in the lower left a woman in a clean white apron is seen hanging up laundry in the sunlight behind her unmortgaged home. Like her, all the houses are simplified, generic shapes, lacking, beyond windows and doors, descriptive architectural details. The undulating landforms, too, are likewise abstracted — like those in his contemporaneous Lake Superior paintings. But unlike the latter landscapes, Spring in the Outskirts is thinly painted. In this respect, it anticipates several architectural scenes of 1925-26, Miners’ Houses, Glace Bay and Summer Houses, Grimsby Park, among them.

Springtime in the Outskirts remained in the artist’s possession for decades. Later, in Vancouver, while preparing for his 1948 retrospective exhibition at the Art Gallery of Toronto, Harris reviewed a number of earlier works he still owned and refurbished several for the show. In a letter in 1947, he wrote to the gallery director that he had “repainted” and “retouched” a number of older canvases, but had not “altered them.” Spring in the Outskirts was one of those he refreshed. To allay any fears, he stated: “Unless people were told they had been repainted in parts no one would know it. In every case, the painting has been improved but this has been done in terms of the day the painting was painted.” Personally, he was more than satisfied by the results and reserved the work for his wife. The stretcher is inscribed “Bess Harris Collection 1946.”