Fine Selection of Suzor-Cotés on Display in Toronto Gallery

When Suzor-Coté returned to Arthabaska in June of 1894 after three years of art study in Paris, it was clear that he was doing so as an artist truly accomplished in his field.  In fact, it is noteworthy that he was honoured with the acceptance of work to exhibit at the Salon de la société des artistes français, an important annual juried exhibition in France. Certainly one of the finest Suzor-Coté paintings of 1894 that we have sold, Still Life with Lilies, will attest to his level of mastery at the date.  In Suzor-Coté: Light and Matter (2002), published to accompany the Suzor-Coté exhibition (2002-2003) for the National Gallery of Canada and the Musée national des beaux-arts du Québec (MNBAQ), curator and Professor Laurier Lacroix writes that Suzor-Coté opened a studio in Montreal at Dominion Square on the upper floor of a Y.M.C.A., where he could paint, exhibit his work and “court art lovers more effectively” (p.74). In September and October of 1895, behind the family house in Arthabaska, he built a fine and very professional studio, described in the periodical Union des Cantons de l’Est “like a real state of the art French studio in every respect”.  According to Lacroix, when the studio opened, the Union des Cantons de l’Est became the artist’s spokesperson by inviting “all friends to drop by for a little visit” (Laurier Lacroix, Suzor-Coté: Light and Matter, Catalogue of the exhibition Suzor-Coté, 1869-1937: Light and Matter, Musée du Québec October 10, 2002 – January 5, 2003 and National Gallery of Canada, Ottawa, Ontario, January 24 – May 11, 2003, p. 74).

Laurier Lacroix and his team of researchers in their landmark study of the master in 2002 Suzor-Coté: Light and Matter, catalogue of the exhibition Suzor-Coté, 1869-1937, write that when Suzor-Coté first contributed paintings to the Royal Canadian Academy of the Arts (R.C.A.) exhibition in 1896, one of the three works he showed was entitled “The Banks of the Nicolet River”, but they had however not been able to locate (pg. 84). It stands to reason that our small jewel-like sketch, fully titled on the reverse by the artist Bords de la Riviere Nicolet  (translated as “The Banks of the Nicolet River”) and dated  “‘96”  is related as a preparatory sketch to the R.C.A. painting.

As with his Montreal studio, Suzor-Coté used his Arthabaska studio as a painting place, an exhibition space and a place to invite friends and potential patrons. Suzor-Coté spent the summer of 1896 in Arthabaska where he undoubtedly painted our composition above. Prime Minister Wilfrid Laurier, the newly elected Prime Minister of Canada and a native of Arthabaska himself, is recorded to have visited Suzor-Coté at least once before the end of October in 1896. 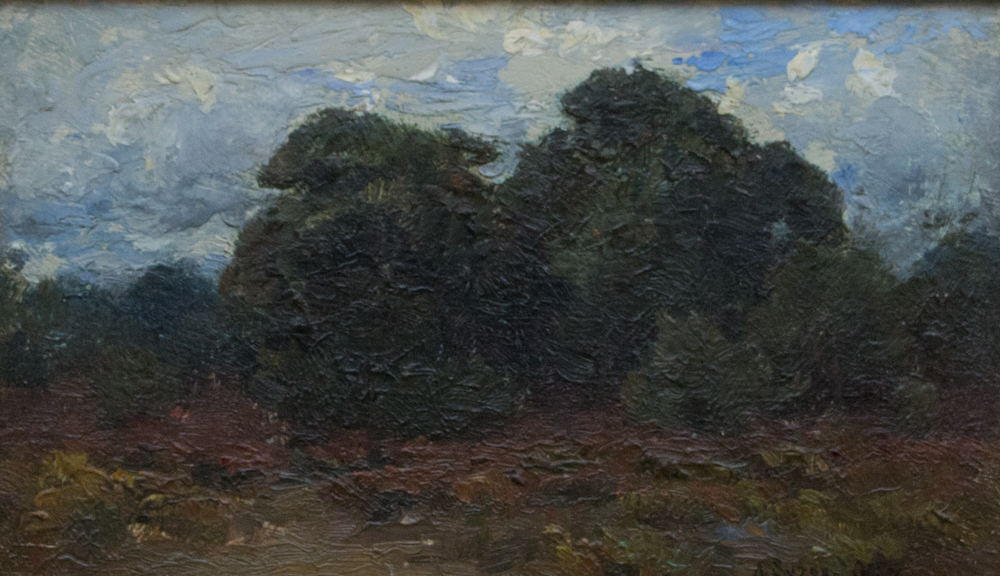 The Suzor-Coté titled by the hand of the artist on the reverse Coin giboyeux, (“Rich Hunting Grounds”) is of the year 1900 when , as Lacroix writes, “Critical approval for the artist reached a peak at the 1900 Paris World Fair.” The date and support, a fine beveled wood panel, would suggest his subject is in France, maybe hunting grounds of Normandy, Brittany where Lacroix’s research generally track him at that timeframe. But Lacroix’s team notes details of Suzor’s movements are scant. We might find him here as close to Paris as to Barbizon. In this painting, as with The Banks of the Nicolet River with the Harpignies influence, Professor Lacroix cites Suzor prepares  “...the ground of his paintings by applying the paint not in a smooth and uniform manner, but thickly and with an underlying energy which gave great energy to the surface colours.”

Suzor-Coté returned to France in the fall of 1897 where he stayed for the greater part of the next ten years.  Professor Lacroix’s exhaustive research allowed him to document in a piecemeal fashion the numerous areas and regions Suzor-Coté painted throughout this decade as well as the abundance of exhibitions and salons where Suzor-Coté’s paintings were presented, with a headline that claims the inclusion of ten Suzor-Coté’s in the Canada Pavilion at the 1900 Paris World’s Fair and being awarded a bronze medal represented “a professional turning point for the artist”. [2] 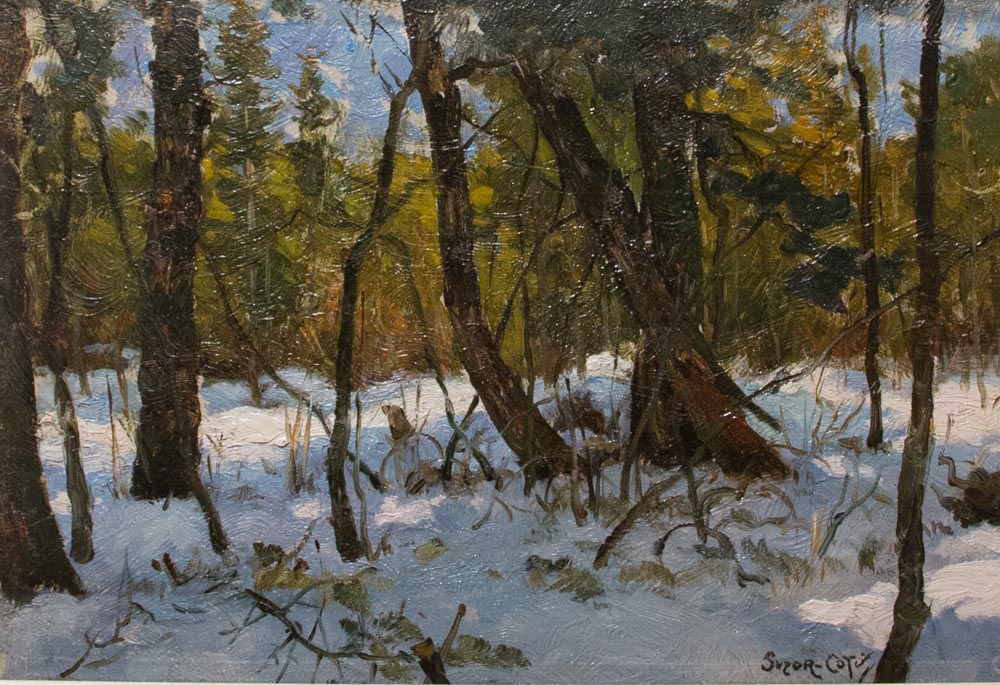 It is the generation 1908 through 1915 when, generally speaking, we find Suzor-Coté’s Impressionist-inspired technique most convincing and most vital.  The National Gallery of Canada’s Settlement on a Hillside, 1909, Winter Landscape, also of 1909, Power Corporations Edgewater Farm and A Thaw, March Evening, Arthabaska both of 1913, and the AGO’s Old Houses on St Louis Street, 1913 are all outstanding examples of his achievements in this layering technique and the luminosity it achieves. Our Winter Woodland could well have been a snippet from which a couple of the aforementioned works were composed. Note again, as with the excellent paintings of 1896 and 1900 illustrated above and available here, the Harpignies-inspired ground.

The following two bronzes are offered as a pair. 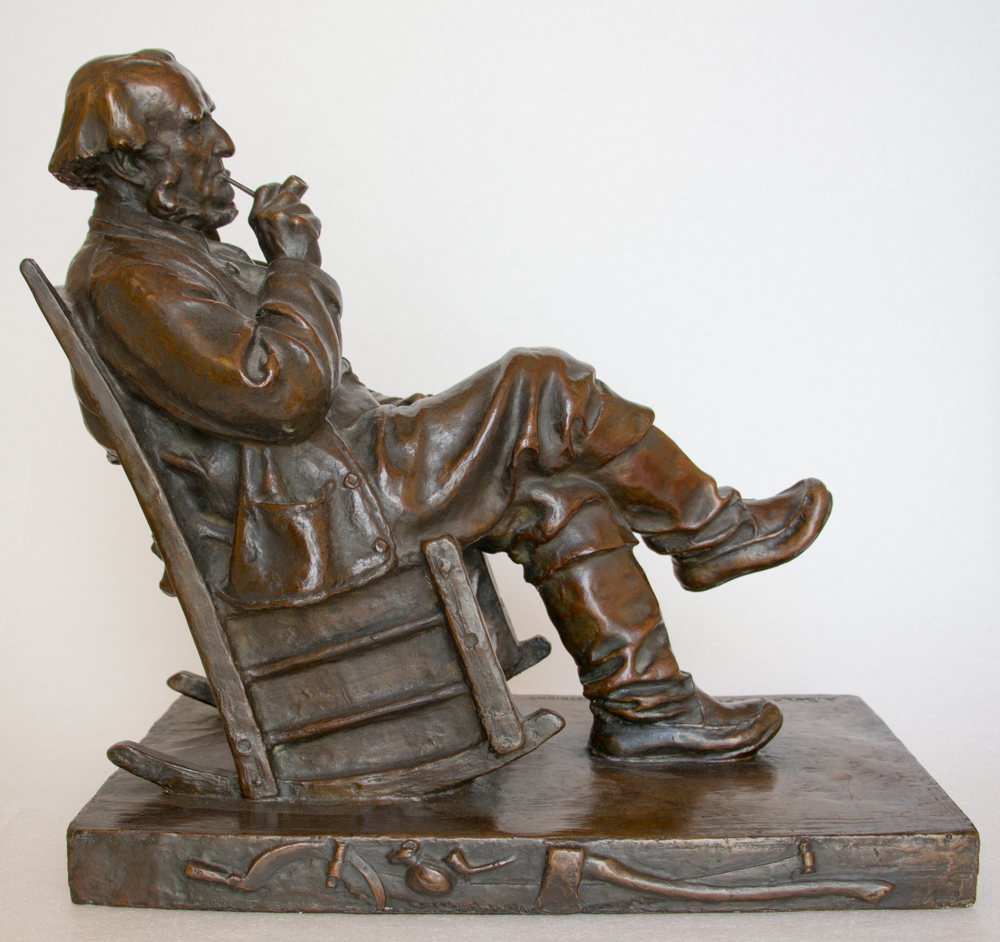 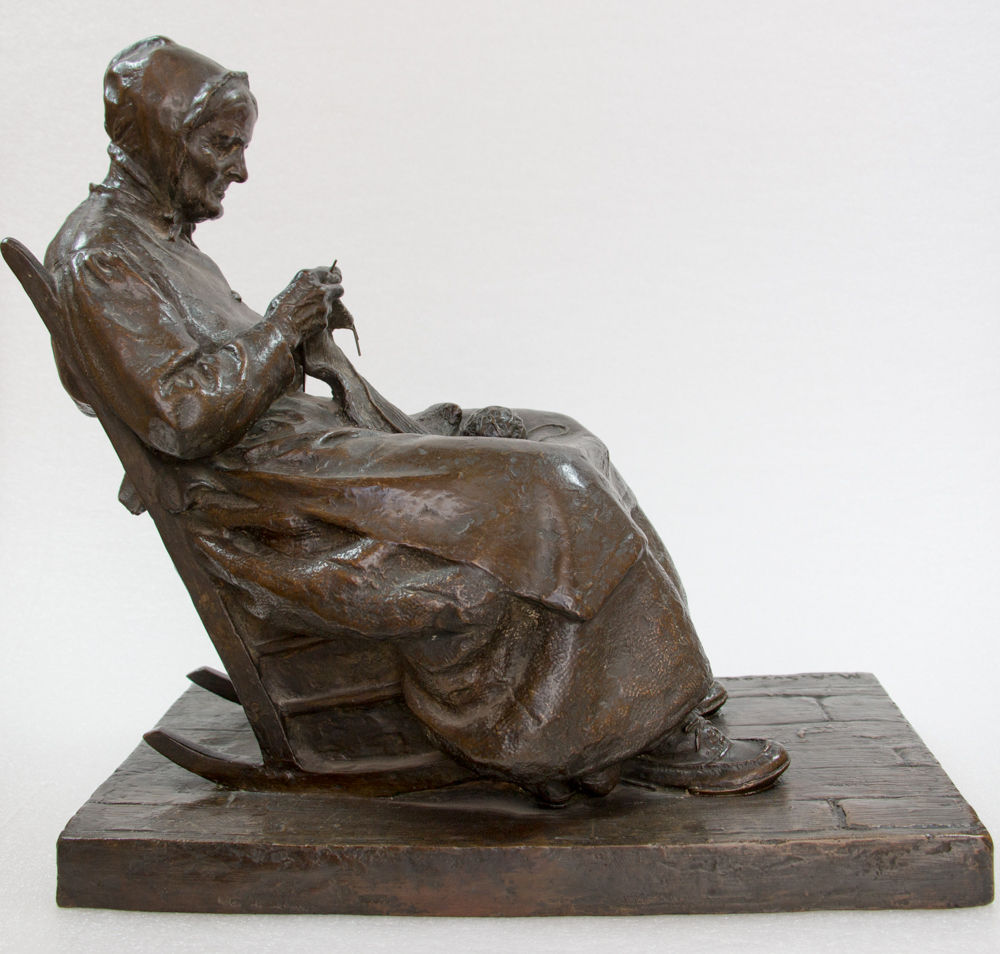 Note The Old Pioneer  is slightly more elevated than his Companion and sits on a plinth more important, the base decorated with the accoutrements of his life. The Companion’s rocking chair is placed on simple boards and the sides of the smaller plinth are unadorned.

Suzor-Coté is one of Canada’s most versatile artists, accomplished in the medium of oil paint, pastel, charcoal and sculpture in bronze. (As an aside, curiously, I cannot recall seeing a watercolour that I recognize as being by his hand.)

His ability to produce works of great artistic merit in more than one medium secured Suzor Coté a unique place in the Canadian art scene of the first half of the 20th century. Indeed, some of his sculptures of rural settlers and country life are now considered landmarks in the history of Canadian art.

Many art enthusiasts would claim Suzor’s greatest contribution is the important body of work he did in bronze, much of which are character studies of rural Quebecers. Suzor, much like anthropologists of the era, sought to capture their rapidly disappearing Canadian lifestyle (224). These depictions of the French Canadian habitant, our pair The Old Pioneer (1912) and The Companion (1918), the most popular of his subjects, “embody the virtues and simple pleasures of habitant life in rural Quebec’’ (Tom Smart).

The foundry mark “Roman Bronze Works , N.Y.” should imply that these are executed with the authority of the artist during his lifetime and therefore “vintage”, what some of us might prefer to term “authentic” insofar as they met the standard vetted personally by the artist himself.

Generally speaking, bronzes were cast from original plasters which had been shipped to Roman Bronze Works by the artist and ordered by Suzor-Coté or his agents, and from 1927, after Suzor suffered a stroke, by his brother Arthur, and then after his death in 1937,  by his widow, Mathilde Coté.  According to Tom Smart, usually they were ordered when a sale was pretty much assured.

There is a record of only 10 casts of the outstanding composition, "Young Canadian Girl".

Conceived in 1922, cast prior to 1935
Bronze, size 6 ¾ in (h)
Indistinctly marked “Copyright Canada and United States 1922”
One of only 10 recorded casts of this outstanding composition.

'This small bust, presented at the exhibition of the Ecole des beaux arts de Montréal in 1929, was erroneously entitled Bust, Maria Chapdelaine. Nevertheless, this representation of Young Canadian Girl does pick up to a certain extent the theme of Maria Chapdeleine …. In the bust of Canadian Girl, the artist has painstakingly modelled the weather-worn face of a rather young woman. Her braided hair falls down her back. Her large straw hat, decorated with a ribbon ending in a bow at the back, is an attribute that clearly places her in the country. It is one of the first times in his sculptural production that the artist has truly created a type of allegorical figure. This work, symbolising country values, goes beyond the narrative aspects of some of his other sculptures such as Le Vieux Pionnier canadien (The Old Canadian Pioneer) and La compagne du vieux pionnier canadien (The Companion of the Old Canadian Pioneer)." (Pierre L'Allier, Suzor-Coté: L'Œuvre sculpté, Musée du Québec, 1991, p. 57' (Translated from original French version by Pierre L'Allier, Suzor-Coté: L'Œuvre sculpté, Musée du Québec, 1991, p. 57).

The Musée nationale des beaux arts du Québec (MNBAQ) has since its inception continued to develop an important collection of Suzor-Cote works of art. In 1926, according to outstanding research undertaken by Curator Michèle Grandbois, the  MNBAQ was approached by the artist to own examples of his entire collection of bronzes, an offer it did not pursue at the time.