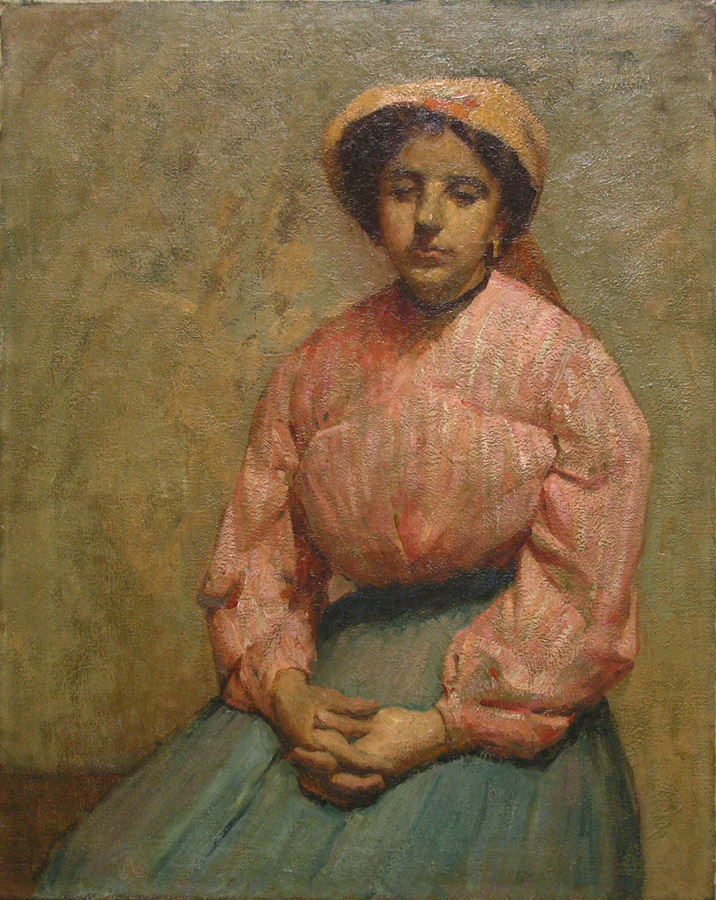 Emily Coonan, Portrait (Probably a self-portrait), 1908 (circa), oil on canvas

Although some might suggest that Emily Coonan (1885-1971) was “reclusive,” it is more than likely that she simply did not fit with the social profile of the other Beaver Hall Women, the letter being from primarily of upper-middle class protestant heritage while Coonan was of Irish Catholic roots and living in the working-class neighbourhood of Pointe St. Charles. Coonan was twenty-three or twenty-four years of age when she painted this important work and pursuing her formal art studies with William Brymner at the School of the Art Association of Montreal (AAM).

Although not even embarked on her professional career, as a student at the Art Association and immediately afterwards, she was the recipient of numerous accolades and awards.  The “Pointe St. Charles prodigy” had been kept in the public eye by art critics in The Montreal Star, The Montreal Gazette and The Herald.  From 1908 she participated in the Spring Exhibitions at the AAM, the Royal Canadian Academy shows, Canadian National Exhibitions and in 1914, the Exhibition of Pictures Given by Canadian Artists in Aid of the Patriotic Fund. It was by all accounts a prolific and immensely innovative period within the context of her artistic career.  Emily Coonan maintained her somewhat uneasy engagement with the public sphere until the early 1930’s, after which she largely disappeared.

Coonan's biographer, art historian Karen Antaki, from the few known images of Emily Coonan notes a resemblance to the present likeness.  Additionally, the current work is signed twice on the reverse "Emily Coonan" and then below it again "Emily Coonan," ... Antaki wrote; “Her legacy encompasses not only a singularly compelling body of work, but also the significance of her contribution as a Canadian woman artist within the context of the advent of modernism in this country..."

Indeed, Coonan's early work, such as this likely self-portrait and Evelina, c. 1910, showcase her appreciation of James Wilson Morrice and the French post-impressionists.  Antaki continues, "Emily Coonan’s approach to the figure, particularly as evidenced in her early work, is remarkable for its richly evocative character.” The reflective or maybe pensive spirit of this portrait is a superb testimony to Coonan’s consummate facility as an artist, a quality that is also evidenced by the modern evolution that Coonan's work would continue to experience out of the public eye.