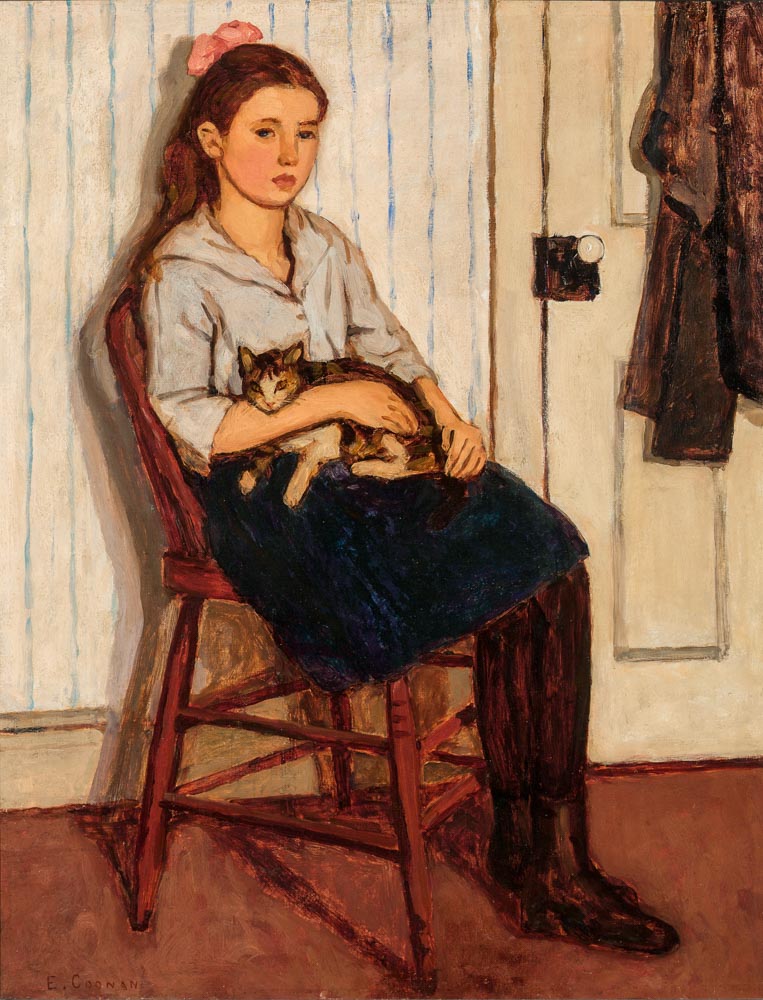 Emily Coonan produced some remarkably compelling figurative works during the 1920s, paintings that stand as important examples of her innovative, singular style. Her representations of the girls and women who peopled her world, a subject that she returned to frequently in her life, are characterized by a disarming simplicity, a directness of expression and execution that belies their complex appeal. Girl and Cat is an exceptional portrait that derives from that period. It encapsulates the artist’s ability to paint evocative ‘character studies,’ but is also unusual in its intimation of an identifiable domestic interior.

Coonan most frequently portrayed her figures in empty settings, devoid of homely items, or overt references to place. With the exception of later works such as The Blue Armchair or The Arabian Nights, which imply a lived-in environment, her figures often appear staged, accessorized by a balloon, a flower, a shawl, or a fan.

That said, regardless of the degree of ambiguity in her work, Coonan’s paintings almost always elicit a felt familiarity in the viewer, a connection kindled by the artist’s persuasive depiction of a particular state of being, a state at once physical and emotional.

On the occasion of its RCA showing in November 1921, Girl and Cat was described by Augustus Bridle as a “marvelous bit of realistic type-portraiture by Emily Coonan — just a young girl in a plain dress seated by a flare of pale wallpaper just the kind you have seen and a white door knob over which hangs a forlorn old coat.”(1)

And it is perhaps true that the viewer is initially attracted to the painting by virtue of its nostalgic appeal, the mundane motifs that draw us back in time, conjuring up a temporal context, and even spurring a subtle sense of the déjà-vu. The subdued, vertically striped blue wallpaper, the strongly painted presence of the iconic doorknob, and the multi-paneled door all resonate as symbols of an inhabited interior, and the garment, hanging easily on the door, humanizes the space even further. That said, it is, as always in Coonan’s work, the interestingly articulated compositional elements, sensory colour choices and even the occasionally rough and sketchy painted passages, which combine to rivet our gaze.

Girl and Cat depicts a fresh-faced young girl, plainly dressed, her only adornment a frothy pink bow in her hair. She is seated on an ordinary wooden chair and holds a small grey and white cat on her lap. The shallow space in which they are situated reinforces the intimacy of the pictured scene, but also destabilizes our reading of it as an everyday event. Both ‘sitters’ display a patient stillness, seemingly suspended in time, and a sense of the momentary permeates the pace. The familiarity of the scene overall is echoed in the empathically captured likenesses of the two — the girl’s serene, pretty countenance and the docile disposition of the little feline. Interestingly, despite its potential to do so, the subject does not succumb to sentimentality, nor does it read as a pictorial snapshot of quotidian life. As in Coonan’s The Black Cat of 1910 it speaks subtly of formal concerns. Several imaged items, for instance the chair or the hair ribbon, are design elements that recur in her paintings. The gentle geometry of the wooden chair, variations of which appear in, for instance, The Green Balloon, Italian Girl, or Girl in Dotted Dress, provides structural coherence as it also reinforces the temporary nature of the ‘sitting’. The fluffy pink bow is an imagistic and chromatic motif frequently seen in the artist’s work, which here adds a touch of frivolity, its inclusion almost an afterthought, a kind of compositional adjustment.

This important painting dates from a pivotal time in Coonan’s career. In 1920, Emily was 35 years old, an active participant in the local and extended exhibitions circuits, with works selling for comparatively high prices. Girl and Cat was exhibited for the first time at the Art Association of Montreal’s Annual Spring Exhibition, which opened March 25, 1920. Whether Coonan attended the event is unclear. While it is known that she departed for Europe in 1920 on the Traveling Scholarship she was awarded in 1914 (a postponement due to the outbreak of WW1), whether she departed from Montreal in the company of fellow artist Claire Fauteux as early as March requires verification, and research is underway to clarify the chronology and events surrounding that trip.

However, we do know that Coonan left Genoa to return home onboard the Princess Matoika April 2, 1921, arriving via Boston armed with several figurative paintings along with the predominantly landscape views she produced while away. Patricia Coonan recounted her aunt’s retelling of events and the “smuggling” back of several rolled up portraits, some fairly large scale such as her painting of “an Italian girl.” The works she produced while abroad, as well as those significant paintings that bracketed them in time, including Girl and Cat, served to consolidate Coonan’s interest in figurative subjects, and extended her exploration into anonymous but intensely suggestive character portraits.

© The text on this page is protected by Copyright