A photograph of the December 1942 exhibition at Galerie l'Art Français is illustrated in Marc-Aurèle Fortin : l'homme à l'oeuvre (Guy Robert, [Montréal: Stanké, 1976], p. 262) which shows the artist seated in front of a salon style hang of an exhibition of his work. The present Lafresnière, premières neiges can be seen in part in the upper left quadrant. The photograph was first published in La Patrie (Montreal) "Un peintre canadien honoré" 20 Dec 1942, p. RR 45.

Lafresnière, First Snow illustrates that brief time of year, when the leaves are still a brilliant array of reds and oranges and yet, a soft, glistening layer of snow lightly covers the ground and rooftops. This brief moment of transition between the fall and the winter is perhaps the best subject matter for Fortin, a virtuosic colorist, as it implored him to broaden his palette and marry the reds of the fall with the blues of the winter.

In this picture, it is impossible to ignore the Fauvist quality of Marc-Aurèle Fortin’s oeuvre. Like the modern Fauvists of the turn of the twentieth century, Fortin’s colours are freed from the tradition of representational, naturalistic painting. His palette invokes the seasons with colours that are beyond nature, like the mauve of the mountains in the background or the blue snow of the foreground. To accomplish this, Fortin even employs modern painting techniques, like painting directly from painting tubes, without pouring or mixing colors on a palette, to keep the paint as fresh and vibrant as possible (Robert, 62).

In the late 1920s, contemporary critics recognise his break from naturalism and describe his work in terms of the supranatural. For example, in 1928, art critic Jean Chauvin described him as, “[...] a magician conjuring up, out of the earth, out of his palette, giant trees, extravagant skies, a whole enchanted nature [...]” (National Gallery, para. 2). Fortin’s landscapes are even compared to Walt Disney’s works, again emphasising the magical allure of the images he creates, which recognisably transcend the natural world (Trépanier, 61).

By 1933, Fortin’s talents are rewarded with his first solo show held at the Art Association of Montreal. In a contemporaneous review printed in the journal La Patrie (first identified by distinguished scholar and art historian Esther Trépanier) critic Jean-Marie Gélinas emphasises Fortin’s prominence in the Montreal art scene:

While a Marc-Aurèle Fortin exhibition is not a novel event for Montrealers—this Impressionist may be, of all the metropolis’ artists, the one who avails himself of most frequent exposure and in the most diverse locations—the fact remains that we find a renewed charm in these decidedly unusual paintings at every occasion, in a country where art is often only in the nascent stages. (Translation of critic Jean-Marie Gélinas, found in Trépanier, 59)

As this statement attests, by the early 1930s, Fortin is well-known and is perhaps one of the most exhibited artists of the era. Unlike most artists, Fortin’s oeuvre did not go unheralded during his lifetime and his work achieved considerable praise throughout his career.

Likewise, Lafresnière, First Snow, was an exceptionally well-received work. The first record listing its exhibition was at Galerie l’art francais in 1942. Fortin was present for the show, a retrospective of the artist’s career, and is pictured in front of the work in the above picture. The exhibition opened to acclaim in Un Peintre Canadien Honoré in La Patrie, a Montreal journal, where the image of Fortin in front of First Snow is also reproduced. 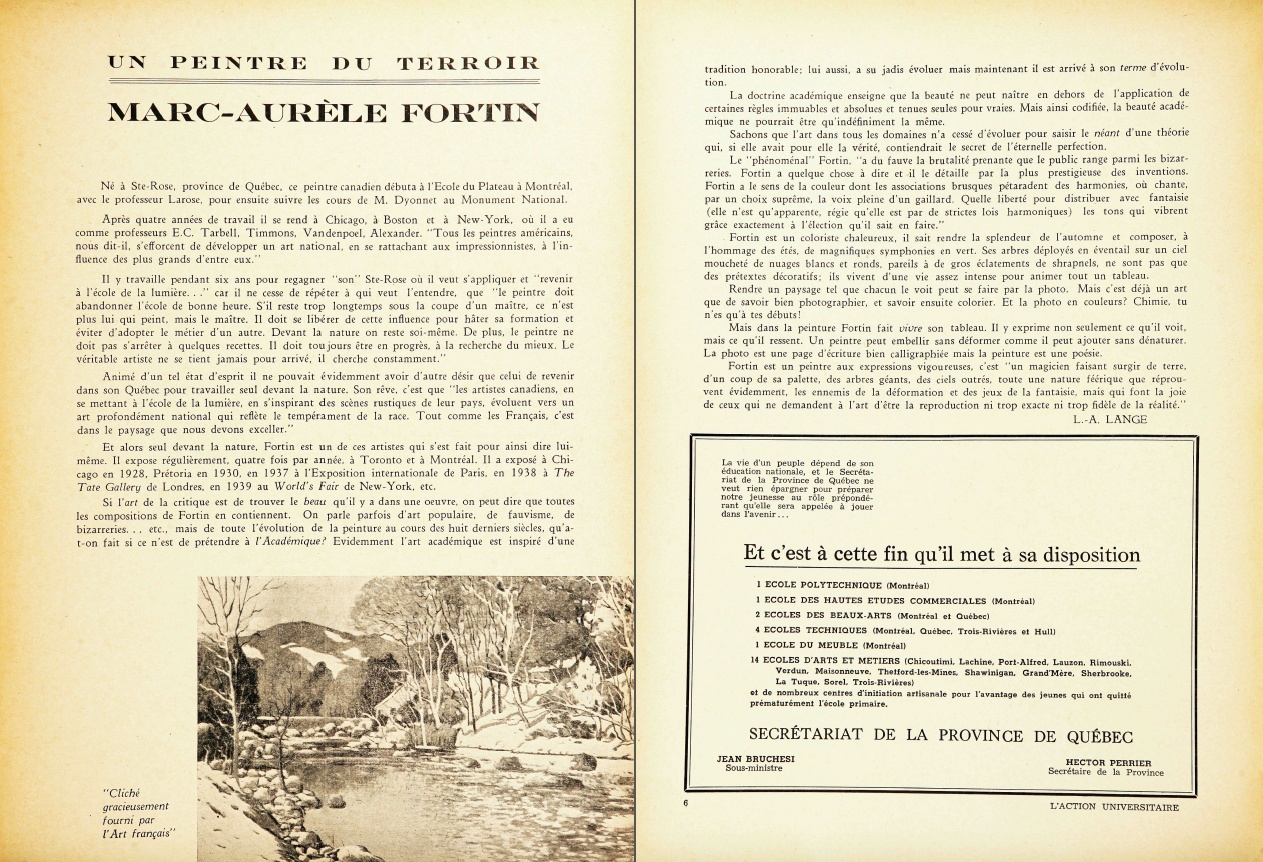 It is not coincidental that a year later in a 1943 article about Fortin, written by Louis Lange, the owner of Galerie L’Art Francais, that Lafresnière, First Snow, is the only Fortin he illustrated. The work, not only monumental in size is equally monumental in beauty. In his appreciation, Lange writes: "Fortin has an inviting sense of colourist expression; he knows how to convey the splendours of the autumn, and how to compose magnificent symphonies of green in tribute to the summer. His trees, unfurled against a sky flecked with white, rotund clouds—resembling large bursts of shrapnel—are not mere decorative pretence; they are bristling with life, enough so to animate the entirety of the canvas." (English translation, Lange, 5)

Lafresnière, First Snow was subsequently exhibited in a Fortin Retrospective exhibition at Galerie Walter Klinkhoff in September 1979 (no. 26). It was also exhibited at the Maison des arts de Laval, Salle Alfred Pellan in the landmark exhibition Alfred Pellan, Marc-Aurèle Fortin et Clarence Gagnon (no. 16) in 1988. It was even exhibited at the Musée Marc-Aurèle Fortin in 1984, (no. 101) and again in 1994 for the ten year anniversary of the museum.

First Snow is emblematic of Fortin’s appreciation for Quebec history and specifically for the poetic, traditional way of life of its rural villages. Author of Marc-Aurèle Fortin: L’Homme à l’œuvre, Guy Robert, claims that Fortin was one of a number of avant-garde artists and intellectuals working in Quebec with similar intentions, namely to capture the beauty of historic Quebec villages; others included Marius Barbeau, Gerald Morisset and Jean Paul Lemieux (Robert, 122).

While many of Fortin’s works allude to his attention to a more traditional way of living, First Snow overtly reveals Fortin’s motivations as it depicts the Légaré family mill in La Fresnière, now old Saint-Eustache, Quebec, as indicated by its title. Fortin’s canvas depicts the mill from further down the Rivière du Chêne (Oak River), looking towards the mill and dam.

The Légaré Mill, c. 1930, From the historical society of Saint-Eustache, Quebec

The Légaré family mill was inaugurated in 1763 alongside a dam created in the adjacent river. The mill was entirely powered by the water from the dam to produce wheat and buckwheat. From its inception, the mill was an essential part of the village, not only was it the first industry introduced in the village, but it also served as a meeting space for village events and celebrations (Marcotte, para. 1). The mill is one of few mills in Quebec to survive well into the second half of the twentieth century and was owned and operated by the Légaré family from 1907 to 1978 when it was given to the city and turned into a Quebec heritage site and museum. Like Fortin’s painting, the mill remains a symbol of Quebec village life in perpetuity as a museum and heritage site. 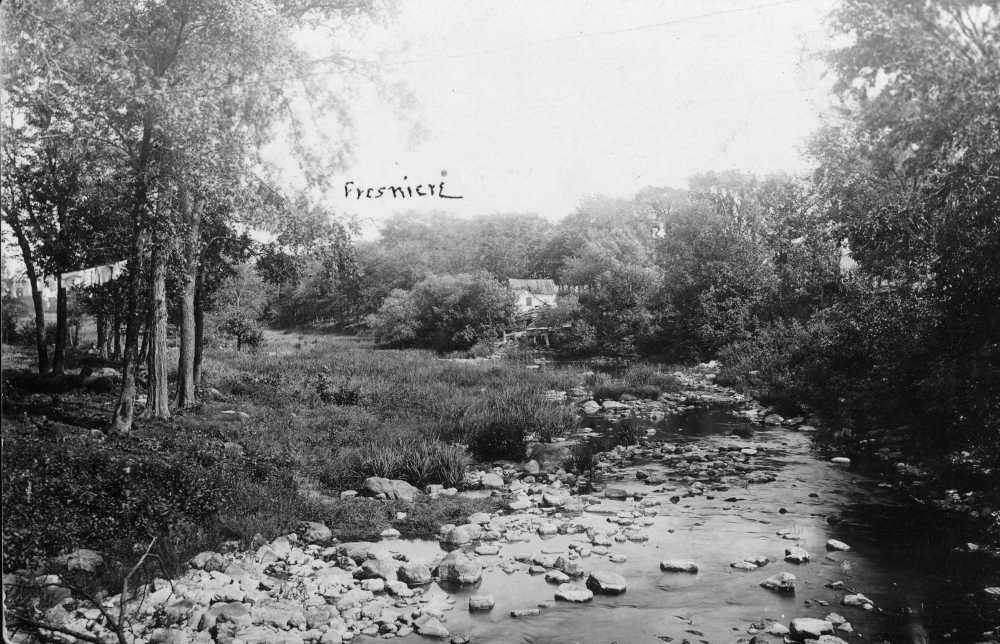 Further along the banks of the Rivière du chêne (Oak River) in La Fresnière, c. 1915, from the Historical society of the Laurentians.

A Related Work at the National Gallery 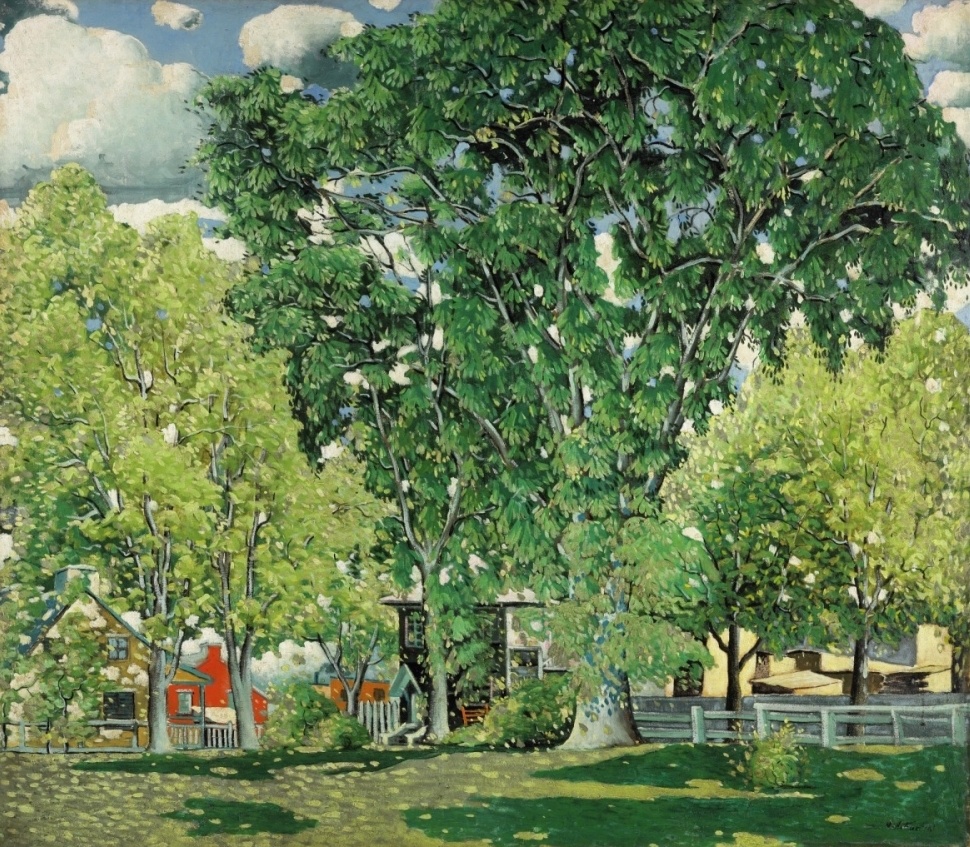 Walter Klinkhoff offered this important Fortin to then director of the National Gallery, J. Russell Harper. As it turned out, his timing was perfect. The National Gallery was just about to have an acquisition committee meeting and with Harper’s encouragement Mr. Klinkhoff drove the painting to Ottawa himself—in a crate, fashioned to the roof of his car. The Gallery was swift in their approval of the work and agreed to purchase it for $2500, roughly equivalent to $20,000 today.

The Klinkhoff family is proud to continue in this tradition of offering works of outstanding quality by Marc-Aurèle Fortin, among other distinguished Canadian artists.

On view in our Toronto Gallery
Artworks